Mayor Earling will not seek re-election 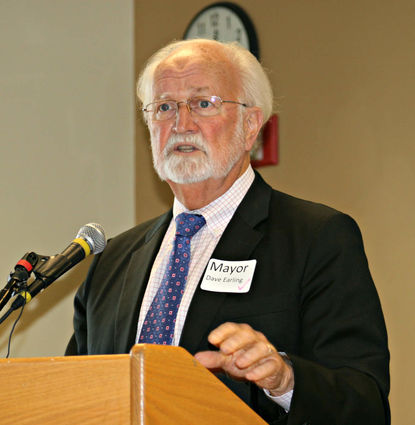 Edmonds Mayor Dave Earling announced on Wednesday, Feb. 6, that he will not seek a third term.

“Many of you have wondered whether I will seek another term as mayor of Edmonds,” he writes in his Mayor’s Corner column in the Beacon, which will be published Thursday.

“I have spent considerable time with my family and a handful of friends weighing the decision for several months. Although this is a hard decision, I have decided not to run for a third term.”

The decision opens the door for Councilmember Mike Nelson, who announced Jan. 17 that he would seek the mayoral position, which pays $121,912 a year.

"I was surprised to hear today Mayor Earling announce he is not running for re-election," Nelson said. "I appreciate the work he has done for Edmonds, and only wish him and his family the best in the future."

Earling, in his column, said he made his decision early, before the official filing week in May, for a reason.

“Originally, I planned to announce this decision later in the spring, but since candidates are beginning to make announcements now, I want to clear the field for a robust race to produce a qualified, new mayor. And I know potential candidates will need time to organize and campaign.”

Earling, 75, was elected mayor in 2011, defeating incumbent Mike Cooper, who had been appointed when Mayor Gary Haakenson left to work for Snohomish County. The race wasn't close, as Earling clearly rode a mandate from Edmonds voters with more than 65 percent of the vote.

He won his second four-year term in 2015, running unopposed.

Earling has been a major player in Edmonds politics for more than 20 years.

In 1997, he fell short to Jo-Anne Jaech in a close race for a seat on the Edmonds City Council. Four years later, Earling was victorious, defeating former councilman Dick Van Hollebeke after Jaech decided not to run again.

In 2003, Earling entered a race for Snohomish County Executive. Despite an important endorsement from The Seattle Times, Earling lost to Aaron Reardon. Reardon beat Earling 52 percent to 48 percent, but later resigned after allegations of financial mismanagement and an extramarital affair.

After moving to Puget Sound in the 1960s, Earling decided to take advantage of his music education and signed on as a music teacher and band director at Shoreline Community College, positions he held from 1967 to 1978. After leaving his teaching career, Earling and his wife Susan moved to Edmonds, where they have lived for about 40 years.

Earling went in to real estate as broker, manager and owner of Edmonds Realty for 25 years. At the same time, he began his active involvement in Edmonds civic activities.

He also served as a board member for the Washington Conservation Voters.

In 2006, Gov. Christine Gregoire appointed Earling to a six-year term on the Central Puget Sound Growth Management Hearing Board. Prior to his appointment, he was a senior fellow at the Cascadia Center of the Discovery Institute, where he worked on transportation and regional issues.

“Together we have grown and reshaped the attitude, the finances, and the future of Edmonds, all while improving the quality of life in our community,” Earling writes in his column.

“All across the city, changes are visible and inspiring. I am incredibly grateful for the opportunity to serve, and look forward to being your mayor for the remainder of my term.”