Citizen of the Year Dorothy Gross dies at 93 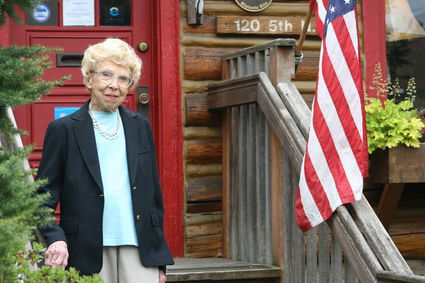 Dorothy Gross in front of the Log Cabin Visitors Center in May. I am flattered, she said on being named Citizen of the Year. Im just an ordinary member of the community.

Editor’s note: Our condolences go out to the family of Dorothy Gross, a longtime volunteer who served the Edmonds Log Cabin Visitor Information Center for nearly 31 years, who recently died at age 93.

No services are planned.

In May, the Edmonds Kiwanis Club named Gross 2018 Edmonds Citizen of the Year.

Here is the story, in full, the Beacon ran in May:

When Dorothy Gross moved to Edmonds with her husband in 1981, she immediately began searching for volunteer opportunities in her new hometown. She found them, and then some, including serving the Edmonds Log Cabin Visitor Information Center for nearly 31 years.

For her tireless efforts to make Edmonds a better place for both visitors and residents, Gross has been named 2018 Edmonds Citizen of the Year.

“I am flattered,” Gross said. “I’m just an ordinary member of the community. I’m not quite sure why the Kiwanis selected me this year, but it’s great, and I’m happy about it.”

made the announcement Monday, May 14. Gross will be honored 11 a.m. Thursday, May 24, at 190 Sunset restaurant in a ceremony sponsored by the club, as well as the Chamber of Commerce and Edmonds Beacon. To purchase tickets, go to http://www.edmondswa.com or call 425-670-1496.

“Dorothy Gross has an amazing way of working for and with people in her life,” said Kiwanis Club member Frannie Cohen, herself a Citizen of the Year in 2014.

“She was our ‘captain’ for all of the volunteers who worked along with her at the Log Cabin, training each person herself. She is admired for her gentle strength, her interest in our community, and planning tours in our local businesses so everyone had more information about our city.

“She always has a smile on her face and in her heart. We are so honored that she is receiving this wonderful award.”

It was just last month that Gross, 92, retired from her volunteering duties. She would probably still be at it if she could.

“I have some health issues,” she said. “I’m just living day to day, but I hope I will be able to attend that luncheon.”

The ceremony will be the 25th for the Kiwanis Club. Recent honorees include Rick Steves last year, as well as the Edmonds Petanque Club in 2016, the Edmonds Floretum Garden Club in 2015 and Frannie Cohen in 2014. Other recent winners have included Bill Brayer, Laura Spehar and the late Mary Van Meter, Peggy Kennedy and Peggy Pritchard Olson.

Gross was born in Auburn and grew up in Enumclaw.

“When I attained the age of reason,” she said, “I left Seattle for California and, subsequently, Hawaii.”

Gross worked as a Navy personnel management specialist for 31 years  29 of which were in Hawaii alongside her husband, Joseph, who served in the Navy.

When the time came to retire, the Grosses decided to leave Hawaii.

“We wanted to move to the mainland so we could travel around our country more easily, instead of having to fly a thousand miles every time we wanted to go to Yellowstone or somewhere,” Gross said.

“We didn’t know anything about Edmonds, but someone in the family suggested we look here, and we immediately liked it very much.” Joseph Gross died in 1999. Both he and Dorothy have their names engraved on commemorative tiles in front of the Edmonds Historical Museum and Edmonds Veterans Plaza.

Gross still lives in her original home in Woodway Meadows, in Edmonds’ south side.

Gross certainly was able to stay busy in her retirement.

In addition to her volunteer work at the Visitors Center, she has volunteered as an English As a Second Language tutor at Edmonds Community College, with the Edmonds Police Department Crime Prevention unit, and as a librarian at the Washington Genealogy and LDS Family History centers.

As a volunteer at the cabin, Gross worked a four-hour shift on Fridays, where she directed residents and visitors toward restaurants, sites and activities. She said tourists’ top questions were about restaurants and restrooms. The latter is easier to answer now, as the city has a public restroom just across the street from the Visitors Center.

“There’s are so many ethnic considerations that can satisfy everyone,” she said.

While at the Visitors Center, Gross selected new volunteers and gave indoctrinations. She said one factor was always key in the selection process.

“I was looking for a personality that seemed to be directed toward other people. A common quality about our volunteers (who today number 24) is a desire to help other people with information, using their own personal knowledge and experience.”

“I like the evening vibe now, people circulating around town, the sidewalk dining, all of the events, of course. Some going for years, some new. There’s a liveliness to town that wasn’t so evident 30-some years ago.”

We hear you, Dorothy.