In a galaxy far away, what can go wrong? 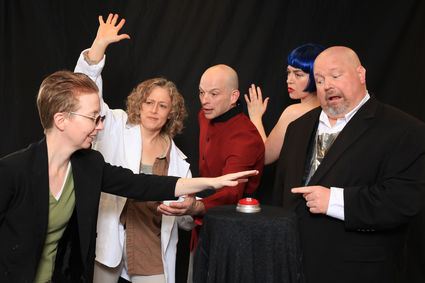 The story is set on a distant planet. The earth is out of resources, and crewmembers are looking to convert a near-dead planet into an inhabitable one. Just three days before everything is supposed to be ready, things start going unexplainably wrong.

“James Lyle is a fantastic local playwright,” Robinson said. “He is a linguist by trade. The words and language that he uses is just phenomenal. It’s very entertaining. It’s got some poignancy when it needs to, and yet a lot of good humor as well.”

Robinson has a 27-year history in theater as a director, producer and actor. He’s earned a degree in theater performance and has performed in multiple states. He started as an actor, and since has transitioned into directing and producing. He used to run a theater company in Seattle called Playwrights’ Theater. This is Robinson’s seventh collaboration with Lyle.

“Originally, when I was running the theater company, it had a specialty in new works,” he said. “One of the things is that we started up a writer’s group.”

“Red Planet Blue” came out of this group. Lyle brought it to read, and Robinson has been involved in providing feedback since the beginning.

“Usually, in anything that he does, I am pretty much in, because the way that he uses and crafts his words is just fantastic, in my opinion,” Robinson said.

“This is one of the best casts I think I’ve ever assembled for a show,” Robinson said.

Robinson likes the collaborative creative process that theater provides, not just among artists, but also with the audience itself.

“I think there is something very unique and fulfilling about it,” he said.

He likes to tell a story in a way that gets audiences to think slightly differently than they did before. Sometimes people will be in agreement with the story, and other times they may not be.

“I don’t like what I would call, ‘so-what theater,’ meaning it could be a very, very entertaining show. But when it’s all said and done, ‘What’s the point? Why did this story have to be told?’”

What Robinson finds fascinating are stories that are told in a slightly different, yet relevant way.