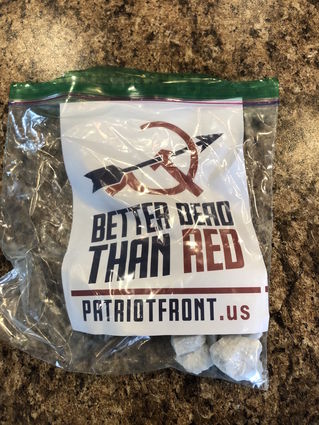 Sandy Welch sent the Beacon a picture of a flyer she spotted in the 19800 block of 78th Place West.

This weekend, the self-described white nationalist group Patriot Front left flyers in plastic bags, loaded down with rocks, in the Meadowdale and Seaview neighborhoods in Edmonds.

Sandy Welch sent the Beacon a picture of one she saw in the 19800 block of 78th Place West. They were also spotted on 199th Street SW and in the Maplewood neighborhood. Edmonds police have been notified.

According to the Southern Poverty Law Center, “Patriot Front is a white nationalist hate group that broke off from Vanguard America in the aftermath of the deadly ‘Unite the Right’ rally in Charlottesville...