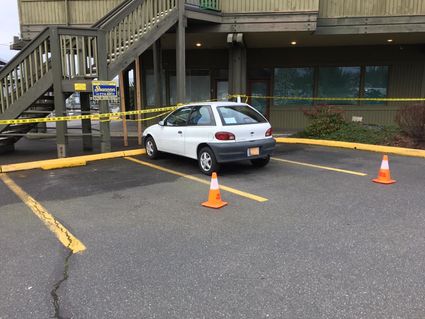 Police closed off an area at Arnies in Edmonds after a man killed himself and wounded his sister.

One man is dead and another person injured after a suicidal 56-year-old man shot his sister in the back before turning the gun on himself, Edmonds Police Sgt. Josh McClure said.

A woman in her 40s was treated by officers and taken to Harborview Medical Center in Seattle. She is currently in stable condition, McClure said.

Initial investigation shows that the dead man and injured female are brother and sister. The sister is believed to be from the Fall City area and arrived in a car with her husband and young son, McClure said.

Witnesses indicated that the man approached and shot the woman before turning the gun on himself. A witness said the victim was holding a hardcover book that may have deflected the shot.

Police recovered a shotgun at the scene.

"This is being investigated as a domestic violence matter," McClure said. "There are no outstanding suspects, and no danger to the community."

Detectives are working with the Snohomish County Medical Examiner's Office in processing the body of the dead man.

In spite of being just blocks away, there is no relation to the homicide that occurred at the Edmonds Senior Center on Dec 14 In that case, Edmonds police arrested two subjects, who have not been charged by the Snohomish County Prosecutor's Office.

Edmonds police say a shooting in the Arnie's parking lot at 300 Admiral Way by the fishing pier has left one person dead.

Another person has been taken to Harborview in Seattle.

More information as it becomes available.