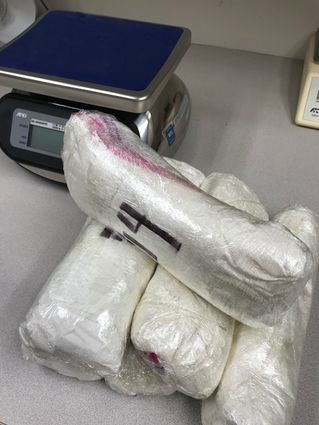 Detectives also served several search warrants, including one at a suspected “drug stash house” in the 6500 block of 208th Street SW in Lynnwood, just east of Edmonds city limits.

Juan Alberto Loya-Ponce, 29, and Misael Alberto Mendivil-Vega, 28 (both from Mexico), are suspected of being leaders of a local drug trafficking operation. They were taken into custody on Nov. 16 with three others suspected of being drug couriers.

Five other suspects were arrested Dec. 5. Detectives seized 11 cars, over $88,000, 13 pounds of heroin, 14 pounds of methamphetamine, 3 pounds of cocaine, approximately 4,000 fentanyl-laced pills, three handguns (one of which was stolen), and an AR-15 assault rifle

Operation Revolving Door,” a joint investigation in partnership with the Federal Bureau of Investigation and the Drug Enforcement Administration, started in 2016.

Loya-Ponce and Mendivil-Vega were identified as leaders of the drug ring.

Loya-Ponce would travel to Washington every two to three months or so and would only stay a couple of weeks at a time, then return to Nogales, Mexico.

The task force identified about 30 suspects involved in the organization. Loya-Ponce and Mendivil-Vega were managing dozens of drug couriers, who would travel from Mexico to Washington on a regular basis. After a few months, the couriers would return to Mexico and were replaced by new drug couriers to avoid law enforcement detection.

In early 2018, undercover detectives infiltrated the operation, and purchased heroin and methamphetamine from the suspects on several occasions.

Law enforcement waited until November 2018, when both Loya-Ponce and Mendivil-Vega were both in Washington to end the investigation with their arrests.

Loya-Ponce and Mendivil-Vega were arrested with three of their drug couriers, Julio Cesar Loya-Soto, Roberto Montano-Armenta and Ana Duran. In addition, 10 other suspects have been arrested and charged in the past two years as part of this investigation.

The investigation was part of a larger, multistate operation that led to 43 arrests and seizures of large quantities of drugs and firearms.