Recreation Supervisor Todd Cort is city’s Employee of the Year 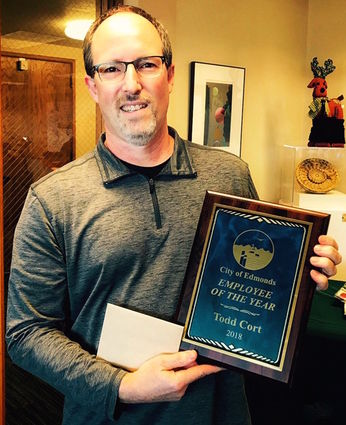 Recreation Supervisor Todd Cort was voted the City of Edmonds’ 2018 Employee of the Year by his colleagues. The award was announced by Mayor Dave Earling at the City’s annual holiday brunch at City Hall last week.

Cort has been with the City for over 13 years. During that time, he has been a recreation coordinator, and was recently promoted to recreation supervisor.

“During his time in Edmonds, Todd has demonstrated excellence in his work performance,” said Parks and Recreation Director Carrie Hite, who nominated Cort.

“He has been a positive team player for the whole department, and citywide. He does what it takes to get the job done, often going above and beyond to provide incredible customer service. He takes initiative, is creative, and demonstrates the value of being a public steward. He volunteered to be on the City’s Wellness Committee and was a strong contributor to this effort citywide.”

Hite said Cort took on a number of new responsibilities in his role with the City this year. He was the staff liaison to the Western Washington University Sustainability Partnership, which was an ongoing nine-month commitment.

During that time, Cort would provide guidance, coaching and mentorship to students working on sustainability projects for the City.

Cort also has been assisting with park planning projects, including the Parks, Recreation and Open Space Plan and the master plan for Civic Park, and he led the effort for the playground replacement at Frances Anderson Center.

Hite says since the Parks Department’s transition in deputy directors, Todd has also “stepped up to the plate to help out with almost everything. He actually cut his vacation short this past month in order to come back and help with some of our larger projects.”

The City’s Employee of the Year award recognizes employees who exhibit outstanding effort and dedicated service to the community. The award recipient is determined by a committee of previous EOY award recipients.