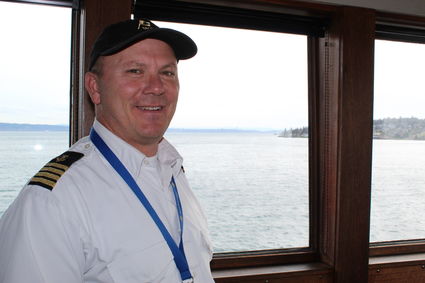 Capt. Mike Sax: The weather that Friday was challenging.

When storm chaser Ben Jurkovich took time off late last week to chase the season’s first big storm, he headed to Port Angeles armed with video equipment. But it was on his return journey to his home in Lake Stevens  via the Hyak ferry from Kingston to Edmonds  where Jurkovich scored his biggest get.

“Wow! I thought what I saw last night was awesome, but I did not expect my video to attract this much attention,” Jurkovich wrote on his Facebook page Friday. “Almost 1,000 shares and 50,000 views. Made a few sells as well. Wild!”

Jurkovich’s video came courtesy of a strong, southeastern windstorm that felled trees and knocked out power to thousands in Edmonds and Puget Sound. As the winds increased on Puget Sound, a long fetch  or wind blowing over a considerable distance  meant wave troughs rose higher than normal when slamming the Hyak.

Of course, for Jurkovich, the storm meant good times. He’s a self-described pro storm chaser who checks weather models daily and creates his own forecasts to help target his searches.

“I refer to, but don’t fully rely on, on-air meteorologists and the Northwest Weather Service because they are forecasting for broad areas,” Jurkovich told the Beacon Tuesday.

“By making my own forecasts, I can choose to go where I think the very most action will be, and it often pans out. I also don’t just chase locally; every year I make it out to Tornado Alley to storm-chase. Over the years, I have seen dozens of tornadoes on my own.”

Unfortunately for him, he missed Tuesday afternoon’s destructive tornado near Port Orchard.

But Jurkovich was on the Hyak when the seas turned rough.

“I had taken Thursday off work because of the potential that existed for the season’s first real interior windstorm of the year,” he said. “That morning, when I was looking over the weather models and satellite imagery, it seemed the system had slowed down substantially.

“I was hearing reports of strong south wind and damage in Port Angeles. Considering it seemed the main event would be later in the day, I decided to head out to Port Angeles to cover the wind and the damage that was happening there.”

Jurkovich planned to leave Port Angeles in time to catch the 6:15 p.m. Edmonds ferry during the forecasted peak of Friday’s storm. When he arrived in Kingston, the wind started to pick up  and peaked on the normally 20-minute trip to Edmonds.

“It took around 45 minutes,” he said. “We came to a full stop for a period of time, and just rocked in the waves.”

In the video, Jurkovich films from the front of the lower car deck as the Hyak plows through the chop on its way to Edmonds. He yells ‘“whoa” as spray gushes over the deck. As the water pools under cars and orange-vested ferry workers hang on to whatever they can, Jurkovich yells again: “Oh, man! Hang onto your hats!”

Jurkovich might not have been having so much fun if he’d been on a different boat.

On Dec. 1, the 144-car Hyak  Washington State Ferries’ oldest in service, commissioned in 1967  replaced the 188-car Spokane, which was due for necessary maintenance. It was the No. 2 boat on the Edmonds-Kingston run (the 188-boat Walla Walla being No. 1) through the end of Saturday, Dec. 15.

While the Spokane and Walla are Jumbo class boats  at 440-feet only trailing the 460-foot Jumbo Mark II class  the smaller Hyak belongs in the ferries’ Super class of 382-foot boats. While the oldest, the Hyak is among the fastest; its name is taken from Chinook jargon for “fast or speedy.”

I took a trip on the Hyak on Monday, along with Ferries’ spokesman Ian Sterling, to get a feel for the boat. We were on the bridge, the Hyak’s highest point, which rocked gently on our trip to Kingston and back to Edmonds. Whitecaps flecked around us on Puget Sound, but it was notably tamer than a few days earlier.

You can tell the Hyak is an older boat  a shiny engine order telegraph (think the “full astern” scene in “Titanic”) is still used to send commands to the engine room. A gold band on its stack signifies 50 years of service.

Capt. Mike Sax, a regular relief master, wasn’t onboard during Friday’s crossing, but he’s seen plenty of action during his time with Washington State Ferries.

“The weather that Friday was challenging,” Sax said. “We get something like that once a year, maybe. I saw the footage. I’ve been in situations like that a lot, at Rosario and Port Townsend weekly, all the time.”

Indeed, those locations frequently get slammed with wild weather, as they are more exposed. But Kitsap Peninsula somewhat shelters central Puget Sound, including Edmonds and Seattle. On Friday, however, Sax said a combination of tides and winds generated the scary conditions on the Edmonds-Kingston run.

“The Spokane and Walla Walla are designed for seas like that,” he added. “They don’t rock around too bad. This boat, not so much.”

“The waves hit the bow and have nowhere to go. They dissipate the energy. But the waves did not break the bow  it was blowing 50 or 60 knots, so the spray just blew out over the cars.”

On Jurkovich’s video (bit.ly/2S6nAuM), you can see that a few car stalls are vacant. That’s intentional during heavy seas; “short-loading” is ferry jargon for keeping cars further back from the edge of the boat.

Edmonds-Kingston ferries can also slow down, as Jurkovich noted, if conditions warrant a storm course. The Edmonds dock is out in the open, but ferries leaving Kingston can take advantage of geography to decrease the effects of wind and waves.

“If the conditions are right, if you have 5- to 7-foot seas coming out of southeast,” Sax said, “we can come out of Kingston and stay in the lee (or sheltered side) of Jefferson head and the south side of Apple Creek Cove. You can ride the lee as long as you can, about two-tenths of a mile from shore, then turn left and ride into Edmonds.”

Although a trip on the Hyak during stormy conditions might be heaven for storm watchers, it’s doubtful that will happen again. The Hyak is scheduled to be decommissioned next year.

When not chasing storms, the 28-year-old Jurkovich is a youth pastor at Calvary Chapel Lake Stevens.

After he captures storm footage, he sends it to Live Storms Media, which passes it to major footage news agencies for licensing.

“On a good day,” Jurkovich said, “storm chasing produces great supplemental income. I also tag all of the local news, and they also buy footage from time to time. Every fall and winter, local video sales pay for Christmas and more.” 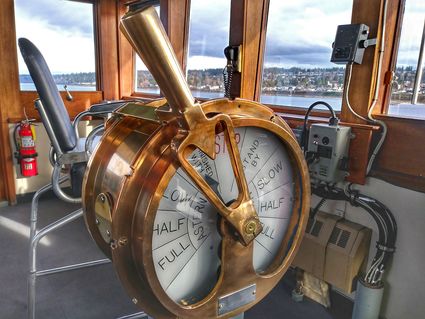 Washington State Ferries' 1967 Hyak has an engine order telegraph, used to send orders from the bridge to the engine room.

Jurkovich said what he loves most about storm chasing is witnessing the atmosphere when it’s most angry.

“When the conditions are right for a 60,000-foot-tall thunderstorm to form and you get to witness a strong tornado form underneath it, words can hardly describe how that feels. I always come away with a sense of awe when I witness something so huge.

“When the situation happened on the Hyak, I felt truly amazed and small because of what was happening on a manmade vessel in the middle of an angry sea. And it’s all because the conditions in the atmosphere were ripe for strong winds to rush up the Puget Sound.