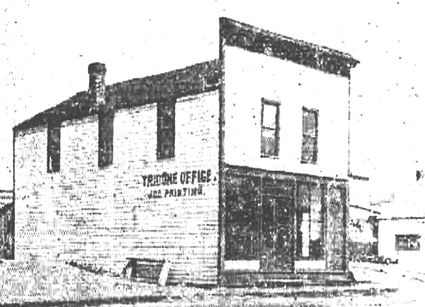 Starting in 1890, when the Edmonds Chronicle began publishing the first newspaper in the newly incorporated city, Edmonds has had a love affair with the news that continues today with the Edmonds Beacon.

Due to hard times, a fire and more tough economic times, the publication of the Chronicle was sporadic, and the paper closed in late 1892. However, it wasn’t long before another newspaper, The Edmonds Lyre, took its place in 1893.

The Lyre soon became another victim of hard times and, in 1896, the publisher moved his plant to Everett. Edmonds had to wait eight years before another newspaper, The Edmonds Review, which Richard Bushnell Jr. began publishing in 1904.

This editor was a man whose very presence seemed to create conflict. His full name was Thorwald Adolf Arthur Siegfriedt. In business, he preferred to be known as T.A.A. Siegfriedt. Although Siegfriedt became the owner and editor of a newspaper, he was also an attorney  and perhaps that explains what at times seemed to be his adversarial manner.

When over a century ago Seattle attorney Siegfriedt arrived in Edmonds to set up his law and real estate office, and also to become the owner and editor of The Edmonds Tribune, he seemed destined to inspire controversy and dislike with a group of the more established residents of the town.

After what became a short and unwelcome stay, his return to Seattle may have prompted some of the people of Edmonds to say “goodbye” and “good riddance.”

A few years ago, when I became aware of Siegfriedt’s extremely short stint as the publisher and editor of the Tribune, I was prompted to scrutinize him more closely. What really sealed my interest was the information that a likeness of him had been hung in effigy in the middle of downtown Edmonds for all to see.

On a more personal note, I came to feel just a bit sorry for Siegfriedt. He seemed to be in the wrong town, in both Edmonds and Seattle. Siegfriedt was an extreme conservative in what appeared to be a liberal part of the country.

Siegfriedt was born in Davenport, Iowa, on March 22, 1881. By 1904, Siegfriedt left his home in Iowa for Seattle. Later, with his wife Lou-Vee and infant daughter, he moved to Edmonds and began his law practice in the State Bank Building.

In May 1908, he purchased The Edmonds Tribune from its two founding proprietors, Will H. Taylor and a Mr. Bealle. Edmonds was still a small town with a population of about 1,500 people, and it seemed natural that the two newspapers would become competitors.

Also, to make the situation more interesting, the Review was different from most newspapers of that time, as it was owned and edited by a woman, Missouri Hanna.

Hanna was a strong woman, outspoken and popular in a leadership role in Washington women’s suffrage movement. Immediately following Siegfriedt’s purchase of the rival paper in 1908, Hanna seemed to take a me-first stand regarding her newspaper.

(She bought a 5-acre tract off Caspers Street; you can find Hanna Park Road there now.)

As he put forth, he was also a strong advocate for law and order. In his opening editorial on May 7, 1908, he wrote that it would be the Tribune’s purpose to avoid animosity, never to compromise with crime, injustice or deceit, and to do everything within the newspaper’s power to make Edmonds an ideal residential community.

His editorial did not appear to be one to incite animosity. So what happened?

Actually, Siegfriedt was probably correct in noting that Edmonds could use more law and order. During this first decade of the 20th century, Edmonds was still a little on the wild side  after all, it was a town whose main industry was lumber as represented by the plethora of shingle mills along its waterfront.

As expected with a number of unmarried men employed in the mills, there were several saloons in town. Often, fights broke out in the city’s streets  occasionally involving gunfire. In fact, in September 1908, gunfire near George (Main) and First streets on a Sunday evening resulted in what was called the accidental death of an innocent resident of Edmonds.

In his editorial, Siegfriedt attributed the shooting to the sale of liquor on Sundays, as well as the inebriated condition of the shooter. Two years after this tragedy, law and order did prevail as Edmonds went dry and closed its saloons in 1910.

However, this event seemed to have been more a result of actions taken by the women of the town, rather than by the Siegfriedt’s law and order advocacy.

Siegfriedt’s newspaper office was located in a building owned by James Brady who was the mayor of Edmonds and a very popular man about town. These two men would soon become adversaries.

Located on the northwest corner of Fourth and George streets, the newspaper building was directly across George Street from Siegfriedt’s law office in the State Bank Building.

In October 1908, Siegfriedt gave up. He sold the newspaper to long-time Edmonds merchant and banker William H. Schumacher.

What seemed to especially upset Siegfriedt was that Howell had suggested, in public, that he should be run out of town. Then, according to Siegfriedt, under cover of darkness that night, while the city marshal was supposed to be patrolling the town, someone had suspended an effigy of him over the middle of the main street of Edmonds, in full view of all the town folks.

He was very vocal about the fact that the gruesome spectacle remained hanging before the public until much later the following day, when some indignant citizens finally removed it.

In his lengthy letter, Siegfriedt took exception to Missouri Hanna’s unflattering personal comments about him in her newspaper, and also for publishing the comment by the Citizen’s Committee that “A certain outsider should be eliminated.”

It was Schumacher who actually came out the loser in this battle between Siegfriedt and the Citizens’ Committee, even though Schumacher’s only involvement in the whole mess came from his taking over as editor of the newspaper and innocently printing a letter written by Siegfriedt, who was a paying customer.

Immediately following the letter’s appearance in the Tribune, Schumacher received a three-day notice to vacate the building or his rent would be increased so much he would be forced to vacate. This notice, of course, came from his landlords, Mayor and Mrs. James Brady.

Luckily, Schumacher did have many friends who came to his aid.

His office furniture and printing equipment were moved and stored in different places around town. A friend donated property located on the south side of George Street between Third and Fourth streets, and with the help of friends, a new building to house the Edmonds Tribune was completed within the week.

In fact, the Tribune never missed publishing a single issue. The building was located where the parking lot of the Bank of America is todayon Main Street, just west of the present-day Chanterelle’s restaurant.

This was the home of the newspaper until 1938, when it was replaced by a larger and more modern structure at 514 Main St.

February 1910 ushered in more peaceful times for the newspaper business in Edmonds when the rivalry between the two diverse newspapers ended. Missouri Hanna’s Edmonds Review was sold to William Schumacher and the two newspapers merged, becoming the Tribune-Review.

Through the years, as Edmonds and the adjacent communities grew, so did the readership of the Edmonds Tribune-Review. In 1921, the paper was sold to Ray Cloud  the author of “Edmonds: The Gem of Puget Sound”  who remained as editor and publisher for more than 30 years.

Cloud, when he retired, sold the paper to John B. McKean; Earl Clark purchased it in 1954 and remained publisher and editor for 11 years. Jones Osborn bought it in 1965. Osborn sold it to two years later to Tom Code, owner of the Enterprise.

In 1961, the newspaper moved to larger accommodations at 130 Second Ave. S. This remained the home of the Tribune-Review until approximately 20 years later when the presses were silenced and a bit of Edmonds history came to an end.

In 1984, LaVonne Ekren and Verda Averill founded The Edmonds View, which only lasted a couple of months.

In 1998, the Edmonds Paper was purchased by Paul Archipley, who founded the Mukilteo Beacon six years earlier.

He renamed it the Edmonds Beacon.

Information for this history is from the collection of Edmonds newspapers located at Sno-Isle Genealogical Society at Heritage Park in Lynnwood, as well as the Edmonds Paper’s “Edmonds: 100 Years for the Gem of Puget Sound.”