Peter Pan, before he never grew up 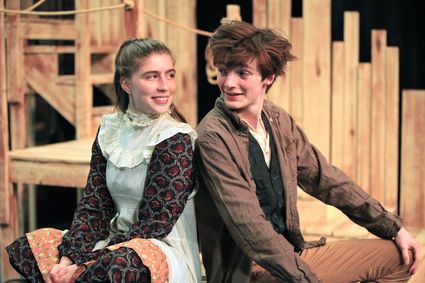 Anna Vizzare and Oliver Girouard star in Driftwood Players Peter and the Starcatcher.

You already know the story of Peter Pan. A young boy who never grows up, a menacing Captain Hook, a fairy named Tinker Bell, mermaids, a group of lost boys, and a faraway world called Neverland.

But did you know how that story originated? You will if you see the Driftwood Players’ “Peter and the Starcatcher” this holiday season.

The play is based on a 2004 book called “Peter and the Starcatchers,” and tells the story of how Peter Pan came to be. The book was then turned into a Broadway show; the theatrical rights have been released, and Driftwood Players and others are taking full advantage.

“I’ve always been a big fan of Peter Pan, the whole story,” Othman said. “As a little kid I remember seeing the Disney movie and being drawn into that world of a kid who never wants to grow up. I read the books when they first came out. I then got to see the show on Broadway and it absolutely blew me away.”

The cast consists of 15 actors, some new to Driftwood, some veterans. All have different backgrounds ranging from comedy, physicality, or just in storytelling. “It’s a nice diverse group to bring this play to life,” Othman said.

Choreographer Molly Hall has worked with Othman in the past. He said they share a similar language and approach to how they want actors to create their characters physically.

“What she does with the movements and techniques of the dances is amazing,” he said.

Mark Press returns to Driftwood as the musical director. Othman had a chance to work with Press last year as an actor in “Beauty and the Beast,” and really loved his style. “He’s a Driftwood staple,” Othman said.

Assistant director Jonathan Fowles has also worked with Othman in the past, and wants to get his hands in directing. “And we just got an amazing design team as well, creating the visual looks  costumes, props, sets, the works.”

Othman remembered seeing the Disney version of “Peter Pan” as a child. He instantaneously fell in love with the boy who uses his imagination and never wants to grow up. “I think as kids we always love using our imagination,” he said.

Even as he became an adult he loved the Peter Pan stories. They pulled him into his childhood. “It is a different way of telling a story that I think audiences are going to love. It’s been fun  creating this world on the Driftwood stage.”

Othman believes theater has a huge impact on the Edmonds community. It’s a shared experience that people have coming together, laughing and being moved to tears that can’t be found anywhere else. Driftwood does a wonderful job choosing shows and creating theater that is very accessible to the community. It uses a lot of local actors who can draw on the sensibilities of the audience.

“You really get a wonderful community sense anytime you are a part of a Driftwood show,” Othman said.