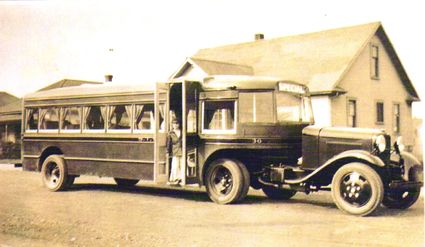 The Alligator Bus, a bus created by George W. Yost that was basically a scary fifth-wheel.

It was often called the Alligator Bus.

To me, it was the bus of my nightmares.

Invented by George W. Yost, one-time bookkeeper and manager of the Yost Auto Company in Edmonds, the bus went into passenger service in late 1934 for the company’s Suburban Transportation System on the Edmonds-Richmond Beach-Seattle run.

Three years later, when I began riding a bus from Edmonds to Seattle, this one became my personal nightmare.

Maybe I was too sensitive as a child and had too vivid an imagination; whatever, there were two frightening events I still remember from my childhood  the 1933 movie “King Kong” and riding on the Alligator Bus.

The 1933 movie was the first one Hollywood made about the gigantic gorilla terrorizing New York after being taken from his home. As a 6-year-old child, after I saw that frightening movie, it took me a long time to be able to sleep at night without awful dreams.

I had gone to the movie under the care of my two older brothers, and they would not leave just because I was scared to death. For years, they laughed about it.

The second horror in my young life was the bus of my nightmares, the Alligator Bus. Just look at this monster. The lucky driver ended up with four wheels under him, and the passenger section had two wheels.

It was as if as paying passengers, we were just an afterthought. The driver also had the motor  it seemed to me that if it all came apart, passengers would have been on their own.

Remember, I am looking back at the way it seemed to an imaginative child. Many years later, I realized that the passengers were simply riding in what was a fifth-wheel trailer.

Later, when I worked in downtown Seattle, I still rode this bus, but by then I had lost most of my childhood fears, and even though I never came to appreciate this strangely designed vehicle, I did not worry about it.

That is, except in the winter, when the roads were icy. It did not handle icy road conditions at all well. I especially remember the hills.

To protect the basic features of his invention, George Yost had filed for a patent on Jan. 30, 1933. The patent was approved July 30, 1934, under the number US1964778A. Included in the patent paperwork for his invention was Yost’s drawing showing some of the design features for his unusual bus.

“The driver’s cab, containing the dashboard, steering wheel, brake levers and gearshift lever in conventional fashion, is pivoted on the chassis of the engine unit. The ‘rear wheels’ have been moved up along the frame but are still part of the engine unit, and the drive is applied through them in the regular way. The bus or truck body acts as a ‘trailer,’ swinging on the pivot drum.

“Yost’s engineering achievements include hooking up the gear lever with the transmission box, now some distance forward from the lever; installing a hydraulic steering mechanism so that the steering post can swing with the trailer body while the front wheel assembly remains stationary; attaching the brake levers to brakes on both the motor and body units with flexible cables; and moving all dashboard apparatus and instruments back about two feet, with flexible attachments to parts in the other unit.”

The article went on to say that the Greyhound Bus Company also had a two-unit bus, on exhibit at the 1934 Chicago World’s Fair’s Century of Progress Exhibition, but that the Yost-designed pivoting system was less complicated, making the bus considerably lighter in weight.

As reported in a publication named Coachbuilt, the buses were manufactured by Tri-coach Corporation with George Washington Yost as the controlling partner. Since the Yost Motor Company was a Ford dealer, the Yost Tri-coach was pictured on a Ford Motor Company postcard advertisement as being powered by a Ford V-8 engine.

In late 1934, two of the Tri-coach designed buses joined the Suburban Transportation System’s bus fleet. Soon, this lighter-weight unconventional bus became so economically popular that Suburban began replacing all of its conventional buses with the Tri-coaches  three in 1935, three more in 1936 and another four in 1937.

The Tri-coach, with its simple design, attracted unfavorable attention from larger bus companies and those companies began putting pressure on the Washington State Legislature until a new traffic code was passed in 1937, making it illegal to carry passengers-for-hire in a trailer in the state.

After all, as I had come to realize, the passenger unit was really a fifth-wheel trailer. In fact, when I read George Yost’s patent papers, that is exactly what he called the system when he filed for his patent in 1933.

Suburban Transportation System fought back against the new law, claiming the Tri-coaches were not “trailer buses.” However, it all ended when the company finally reached an agreement to discontinue building buses of this design. The 12 already in service were “grandfathered” and remained in operation until the late 1940s.

I understand there have been other similar buses manufactured, but none were ever quite the same as George Yost’s old Alligator Bus.

#Betty Gaeng is a local historian and member of the Edmonds Cemetery board.