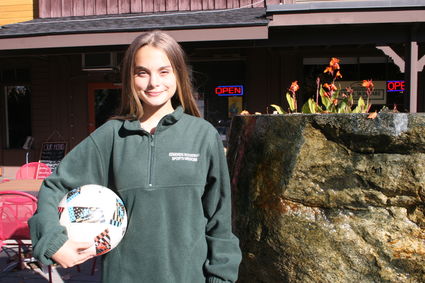 Juliet Hufford, who is leaving her Beacon delivery route to focus on a career after high school, holds an old friend  a soccer ball. She is at Hazel Miller Plaza, and works at Las Brisas.

Juliet Hufford has delivered the Edmonds Beacon half her life, but she’s close to hanging it up now. Not because she really wants to  it’s just that she’s 17, and her future looms. She’s super busy.

On Thursday, Oct. 18, Juliet will end eight years as a Beacon carrier, toting anywhere from 60 to 90 papers weekly to her Edmonds neighborhood near College Place Elementary.

Rain or shine, of course.

Juliet was encouraged by her parents to take over her older brother Avery’s route when she began playing premier soccer.

In the process, Juliet and her dad, Kerry Hufford, have seen tremendous benefits, both social and, yes, monetary.

It’s been good money, and supplements her income as a host at Las Brisas.

Juliet says she collects between $100 and $150 a month, up to $200 during the holidays. Juliet also occasionally personalizes her delivery by inserting newsletters updating customers about her life. The one coming up Oct. 18 will be special.

“When I started, I was really shy,” she said. “But with the newspaper, I had to talk to all these people at their doorsteps. Now I’m more of an open person.”

“Those customers have seen her grow up,” Kerry said. “She comes around, they talk to her and ask her about soccer or her dog, who she’s taken on her route. It’s created a situation where she has to relate to people who are neighbors. With that, she’s been able to get a feeling of being in the community.

“It’s an old-fashioned thing to hand a paper to somebody and hand you something back, when they can get the paper for free.”

(Regular Edmonds Beacon readers might recognize Juliet as well, as she was profiled in 2015 and 2012.)

“Her work ethic has translated onto the soccer field,” Kerry said. “There’s an inner resolve that is stronger than most of the players she’s with. She’s one of the smallest players on the field, but she’s pound-for-pound one of the toughest.” 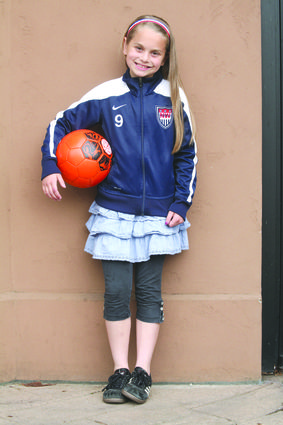 Juliet Hufford at age 12. When she wasn't delivering the Beacon, she was playing soccer.

That ethic, and her soccer skills, have led to several colleges offering scholarships.

For now, Juliet said she’s looking to her last delivery day with mixed feelings. She has enjoyed it, but it’s time to move on.

“It’s kind of peaceful just walking around when delivering the paper,” she said. “You can listen to music or think; it’s just a time to let go. It’s also very meditative. Right now, it’s like automatic; I don’t think of which houses I have to go to since I’ve been doing it for eight years.”

There are Beacon carrier routes open all around Edmonds. If you are interested in a newspaper route, email the Circulation Department at circulation@yourbeacon.net.