Edmonds-Woodway running back Capassio Cherry is met by Meadowdales Alex Maxwell (55) and Baboucarr Sowe (4) during the annual Jam the Stands game Friday, Sept. 21, at Edmonds Stadium.

Moen completed 27 of 38 passes for 292 yards and three touchdowns and ran for two more scores to help lead the Mavericks to a 41-20 victory over the Warriors in a Wesco 3A South football game Friday, Sept. 21, at Edmonds Stadium.

Like it did against Lynnwood two weeks ago, Meadowdale put up points early. The Mavericks led 14-0 after the first quarter and scored two more touchdowns in the second quarter before Edmonds-Woodway finally found the end zone.

“It means a lot,” Moen said of winning the annual Jam the Stands contest. “Every week we come in. We prepare. We get better.”

Meadowdale coach Matt Leonard was pleased with the offense’s performance, even though he said the Mavericks missed some opportunities.

“We really should have had 42 points in the first half,” he said. “We just didn’t execute. But they play real good defense.  I’m really proud of the way we played. We prepared really hard for this.”

Part of that preparation for the pass-happy Mavericks was a concerted effort to establish the run game.

Senior running back Nate Hebert rushed for 94 yards on 28 carries and Moen gained 40 yards on 12 carries.

“We had extra sessions all week. We did extra run sessions,” Leonard said.

The Warriors have shut down the Meadowdale ground game in recent years.

“We wanted to make sure that we could run the ball,” Leonard said.

The decision to have Moen use his legs instead of his arm also was part of Meadowdale’s game plan.

“It’s by design against them,” Leonard said. “They make it hard for us. We know we have to run our quarterback to have success on them.”

Added Moen, “Everything was working well. The O-line was blocking. We had receivers catching the ball. We were making plays.”

The lack of pressure on Moen by the Edmonds-Woodway defense was tough to overcome in Warriors coach John Gradwohl’s opinion. E-W sacked Moen only one time.

“I thought he had all day,” Gradwohl said. “He’s a good player and you give him a lot of time, that’s trouble. So I think that was the difference.”

The Edmonds-Woodway offense didn’t help its defense, especially in a first half where the Warriors recorded only one first down  on a Capassio Cherry touchdown run.

“I don’t know that we really stopped them all night long,” Gradwohl said. “I didn’t feel like we did much in the first half to really challenge them. I felt like they were taking it to us pretty good.”

Meadowdale (2-1 in the league, 2-2 overall) set the tone on the opening drive of the game, marching down the field 69 yards on 13 plays with Moen running 21 yards for a touchdown at the 6:49 mark. Moen then found Hebert on a 27-yard touchdown pass with 1:34 remaining in the quarter.

Moen scored on a 9-yard run and followed with a 9-yard touchdown pass to Mason Vaughn in the second quarter.

After being contained for most of the first half, Cherry finally busted loose for a spectacular 74-yard touchdown run to cut the deficit to 27-7 with 5:56 left in the first half. The Edmonds-Woodway defense then forced a Meadowdale punt and the Warriors had an opportunity to cut the deficit to a more manageable 13 points with another TD. But the Meadowdale defense shut down the Warriors.

“No offense to anyone else on that team. Don’t let 2 (Cherry) beat you,” Leonard said. “You can see, he gets a crease. He’s electric. The one first down in the first half was a TD. It was all hats on the ball and try to make somebody else beat us.”

The Edmonds-Woodway offense opened the second half with its best drive of the game  seven plays, 75 yards. Senior quarterback Patrick Norton threw a 15-yard touchdown pass to Charm Pommachan with 9:11 remaining in the third quarter, as the Warriors cut the deficit to 27-14.

“I challenged our guys at halftime,” Gradwohl said. “We were able to make some plays in the second half.”

Meadowdale responded with a time-consuming 9-play, 68-yard drive with Herbert running for a 1-yard touchdown to boost the Mavericks’ advantage to 34-14.

On Edmonds-Woodway’s ensuing possession, Cherry scored on a 41-yard touchdown run to cut the deficit to 14 points  34-20.

The Mavericks responded with a 9-play, 71-yard scoring drive that lasted almost four minutes. Moen found Vaughn for the second time - on a 27-yard touchdown pass with 1:38 left in the third quarter.

“We had a couple of chances on defense to stop them and they made some good plays to keep their drives going,” Gradwohl said. 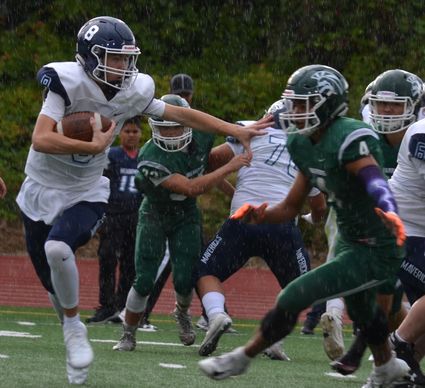 Meadowdale quarterback Hunter Moen runs with the ball against Edmonds-Woodway.

The Warriors’ young offensive line is having problems controlling the line of scrimmage, Gradwohl said. “It makes it hard to pretty much do anything.  It’s frustrating because the kids are giving it everything they’ve got.”

Though Moen was only sacked once, Leonard also saw some mistakes in Meadowdale’s pass protection. The Mavericks had difficulty at times dealing with Edmonds-Woodway’s blitzes.

“Hunter had to make some guys miss,” Leonard said. “It’s really hard to replicate what someone is going to do for blitzes. They ran some blitzes we hadn’t seen them run. They put some pressure on us. We only gave up one sack. That’s pretty good.”