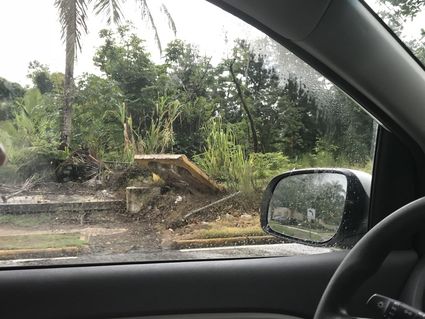 Sights of destruction like this are all too common in Puerto Rico, even almost a year after Hurricanes Irma and Maria hit.

With Puerto Rico still recovering from damage caused by Hurricanes Irma and Maria between August and October of last year, Lillian Ortiz-Self traveled to her parents’ homeland in August to see the damage first hand, and help however she could.

A recent report showed roughly 3,000 people died as a result of the hurricanes, and it is estimated there was more than $150 billion in damages.

“I wanted to go and visit my dad, and I wanted to help the island and do what I could,” she said.

She and much of her family assisted various humanitarian groups on the island by helping build roofs, dig ditches, and put up walls.

“I guilted my cousins into going,” she said. “We had about 25 people go to each service project.”

Destruction was clear, as many people lacked basic daily resources.

“People went for months without water or electricity,” Ortiz-Self said. “There was lots of flooding. There’s a lack of medical care and no medicine. People couldn’t receive pharmaceutical replenishment. My dad, who has Alzheimer’s, couldn’t get medicine.”

Her cousin owns a nursing home, and said they had to run generators to keep people on respirators.

“Other nursing homes didn’t have those options.”

One thing she wished to reiterate was the fact that Puerto Ricans are U.S. citizens and have been since 1917, and many were soon drafted to serve in the first World War, despite not speaking English.

“They fought in our wars and lost many lives protecting democracy,” she said.

During her trip, she said many Puerto Ricans felt like the U.S. turned their backs on them and didn’t provide the timely help they needed.

“It is immoral to turn our backs on our own just because they do not live in the mainland,” Ortiz-Self said.

One of the biggest issues, she said, was the Jones Act, which requires that any goods brought into Puerto Rico must be brought in on U.S. ships, thus most supplies have to go through the U.S. first.

“During the hurricane, everything was delayed,” she said.

She said the Trump administration and Congress failed the people of the island. President Donald Trump was quoted as saying the United States’ response to Puerto Rico was “fantastic.”

“This administration has an obligation to do what should have been done immediately after the first hurricane hit the island; to ensure the safety, protection and well being of every human being, and to fight to restore their infrastructure, schools, homes, and hospitals,” Ortiz-Self said.

“They were hit by Irma and Maria within two weeks,” Ortiz-Self said. “The U.S. should have sent resources after Irma, and they didn’t. They delayed sending the military, and they didn’t send enough troops. It’s just off the coast of Florida.”

She said the government gave excuses about its inability to get troops and supplies onto the island.

“What can we do if we face something bigger?”

During her presentation, Ortiz-Self said there were 32 Congressional hearings after Hurricane Katrina hit the Southeast in 2005, but only one after Irma and Maria. But she did laud Sen. Maria Cantwell for her efforts in trying to restore electricity on the island.

During her trip, Ortiz-Self talked to people of all ages and backgrounds who were struggling in the wake of disaster.

“The most enriching thing was having real life conversations with people whose lives were torn apart,” Ortiz-Self said. “I had grandmas asking me why the U.S. forgot about them.”

She said she saw kids sleeping in beds that had been underwater, and she met one child who was in a body cast because the family had to use a hammock to sleep, and it caused the ceiling to collapse on them, causing a spinal injury.

Ortiz-Self said although Puerto Ricans are U.S. citizens, they don’t feel like true citizens due to a lack of representation in Washington, D.C., even though they pay U.S. taxes.

“They feel they have taxation without representation,” she said. “Many (Puerto Ricans) blame the Jones Act, taxes, and history for the bankrupt condition of the island. Students down there said, ‘They gave us citizenship, and put us in a box.’”

Ortiz-Self said kids are dropping out of school because their schools either closed, or the path to get to school is inaccessible. She also said many people are leaving the island, especially recent college graduates, because they can’t find employment.

“Young people on the island feel hopeless,” she said. “They feel abandoned. They were humiliated with the Trump paper towel incident. People with multiple degrees can’t find a job, and are having to decide whether to leave the island.”

Ortiz-Self closed her presentation urging those in attendance to help Puerto Rico by contacting their representatives in Congress to repeal the Jones Act, and to advocate for more financial assistance. She also said if people can afford it, to visit the island, as a large source of their revenue is from tourism. 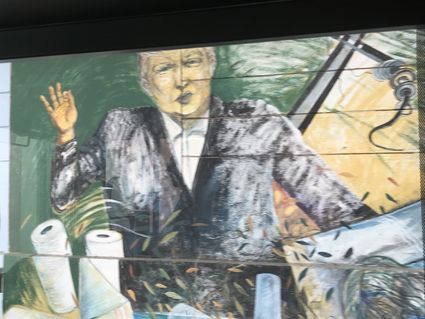 Rep. Lillian Ortiz-Self said many young people are creating murals to voice frustrations with the U.S. governments response to the hurricanes. Here, the creator shows displeasure with President Donald Trumps paper towel incident, when he tossed paper towels into a crowd of Puerto Rican citizens.