50 years ago: Edmonds High School graduation, and a special senior 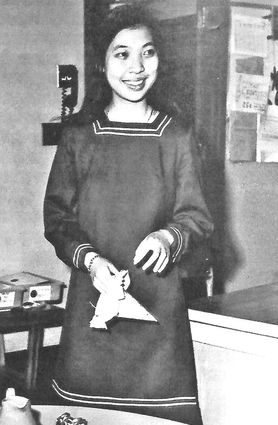 Nguyen Thi Tuong Lyng, from South Vietnam, spent her senior year at Edmonds High School, where she was known as Lynh Nguyen.

On Saturday, Sept. 15, 2018, from 6-11 p.m., a group of the surviving graduates of the 1968 Edmonds High School class will come together at the Embassy Suites in Lynnwood to celebrate their 50th anniversary reunion.

In 1967 and 1968, they became known as the flower children. Now, most are retired. Some surely have grandchildren, maybe even great-grandchildren.

Looking back to 1968, the country was embroiled in an unpopular conflict in Vietnam. The government had plans to send 50,000 more troops to Vietnam by June 1968, for a total of 525,000 troops in the jungle battlefields of the unfamiliar and far-away country.

At home, there was little understanding as to why we were even involved in what was considered a civil war in that country.

My daughter Marilyn is a member of the 1968 Edmonds High School reunion planning committee, and she brought to my attention that the seniors had a very special classmate that year.

Her full name was Nguyen Thi Tuong Lyng, and she was from South Vietnam. She spent her senior year at EHS as a foreign exchange student. Her fellow classmates called her Lynh  she went by Lynh Nguyen in the U.S.  much of her story was told in the school’s 1968 yearbook.

At school she was dubbed the “temporarily American” girl. Lynh came from Bien Hoa, South Vietnam, about 16 miles from Saigon. After arriving on Aug. 3, 1967, she made her home in Edmonds with Mr. and Mrs. Arnold Brakke and their three daughters, Lynh’s American sisters: Marta, Laura-Leigh and Heidi Brakke; and also, numerous peekapoo puppies.

Before coming to America, some of Lynh’s knowledge of America appeared to have come from the movies.

“When I came to Washington, I expected lots of Indians and horses, but Americans are so nice,” she said.

“Everything is so noisy, and because of the appliances and canned food, American ladies don’t have to work as hard as the Vietnamese. I like American food, except for pizza. In Vietnam, we eat lots of rice with vegetables, and no sweets.”

Lynh found that life in the United States was very different than in her country. Boys and girls did not attend school together in Vietnam, and dating didn’t happen until a girl was 18  she was not allowed to date unless her little brother went along with the couple.

She had to adjust to having boys in her classes at Edmonds High. Before coming to America for her final year of high school, Lynh already had a remarkable education in Vietnam  she had studied calculus, trigonometry, physics and six years of English. During her year at Edmonds, Lynh was a member of the Torch Honor Society.

For Lynh’s first American Christmas, she showed her classmates how to make origami birds from paper for decorations on the Christmas tree; a gigantic fir tree located in the school’s cafetorium. The next day, when a snowstorm moved into the area, she saw snow for the first time.

She signed up for nine weeks of the school district’s ski school, and although she became an avid skier, it may have been her first and last year on the ski slopes. Vietnam does not have snow.

For the tolo dance  where girls asks the boys for a date  Lynh’s date was a boy named Andreas, who was a Kent-Meridian High School foreign exchange student from West Germany. The day before the dance, the school’s Association of Foreign Students (AFS) gave Lynh a surprise party to celebrate her 18 birthday Feb. 9.

There were a lot of cards and a gift of enough money to cover her tolo expenses. The EHS student body gave her a camera with film and flash bulbs.

Lynh knew that after graduation she would be returning to certain danger in her war-torn country.

During an interview, she said, “Although I’ve never seen a battle, we can hear the attacks on the American Air Base near Bien Hoa. With the war continuing, it’s unsafe to go on trips. If we go by train, they blow up the railroads.

“The Americans have lots of money. If the Americans weren’t in Vietnam, lots of people would be out of work. However, if you work for the Americans, you don’t tell anyone. If the Viet Cong find out, they kill you. The Viet Cong are unknown. They may know us, but we don’t know them.”

Lynh had her mind set on becoming a pharmacist in her home country. Her plans were to attend the university in nearby Saigon, and then to finish her pharmacy studies in Australia during her last two years of college.

Finally, when Lynh told of her year spent living in the United States, she said,

“I love Edmonds. When I visited other school for exchanges, I knew Edmonds was my home.” After graduation, Lynh Nguyen returned to her home in South Vietnam to join her parents and her 10 brothers and sisters.

My daughter recently made contact with one of the members of Lynh Nguyen’s host Edmonds Brakke family, and we learned there is now more to add to Lynh’s story. She survived the war and has become a married, naturalized American citizen with a home and business in California.

Her family emigrated to the United States many years ago. Lynh will be receiving an invitation to attend this Edmonds High School hallmark reunion party.