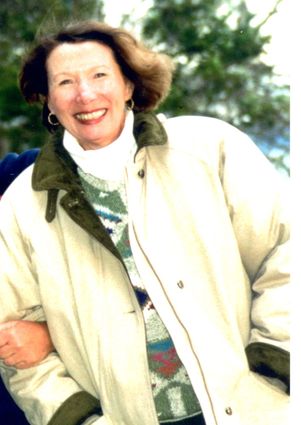 Gloria (Moore) Osberg, age 90, of Edmonds passed away on July 5, 2018, after a long battle with Parkinson's disease.

She was born Dec. 26, 1927, in Wenatchee, Washington. After graduation from Wenatchee High School, she studied at the University of Washington on an academic scholarship, earning a BFA degree in 1950.

For several years, she lived in the San Francisco Bay area, working at various secretarial jobs. In the winter of 1957-1958, she was employed at Sun Valley, Idaho, by the Union Pacific Railroad as a secretary in the office of the Sun Valley Ski Club.

Gloria was featured as the powder skiing model in a National Geographic magazine article about San Valley, published in the February 1959 issue.

In the summer of 1958, she was hired by the Special Services Division of the U.S. Army as a civilian employee, stationed in Munich, Germany. She had plenty of opportunity to enjoy the ski resorts of Austria and Switzerland.

Gloria met and married Capt. Frank A. Moore, an Army doctor stationed in Heilbrunn, Germany. After Dr. Moore was discharged in 1962, they returned to the states and a daughter, Wendy, was born in 1964 in San Francisco. In 1965, the family moved to Medford, Oregon, and adopted a child, a boy, Scott. Gloria and Dr. Moore divorced in 1978.

She spent time during the winter ski seasons in Sun Valley, where she was associated in the jewelry business with her brother, the artistically talented Rick Miller. Rick was a veteran Sun Valley ski instructor, a custom jewelry designer and a renowned Western watercolor artist.

Gloria became a charter member, with Anne Hollingshead, of a group of hikers calling themselves the "Thursday Hikers." In 1987, Gloria and Anne co-authored and published a hiking guidebook, "Day Hiking Near Sun Valley."

The book was a success from the first printing. At this time, Gloria was working at the Forest Service office in Ketchum, where she gained first-hand knowledge of the trail system in the mountain ranges surrounding the Sun Valley area.

The hiking book was a first of its kind. Hikers enjoyed the novel user-friendly format, with removable pages and plastic sleeve for easy portability.

Mutual interests brought John Osberg and Gloria together in 1989. They married in Sun Valley in 1990 and started a life together of outdoor pursuits and adventure wilderness travel. They traveled extensively in their motor home for camping and hiking. They took many canoe and river rafting trips, on rivers from the Rio Grande in Texas and others throughout the Southwestern United States, to remote rivers in the Yukon and the Northwest territories in Canada.

They were avid skiers and loved their home in Sun Valley. They also built a log cabin in the area of Newman Creek, north of Sun Valley.

Gloria wrote a second hiking book "Easy Hiking Near Sun Valley" in 1995. This book emphasized hikes for visitors to the valley who needed a short hike to a scenic destination, appropriate for family and handicapped persons. Also, in 1995, Gloria was asked by the Idaho Conservation League (ICL) if she woul4 update and reprint the book, "Day Hiking Near Sun Valley." The new edition was well received and subsequently, Gloria donated the copyrights of both books to the ICL, as well as all future profits from sales of the books.

Gloria has been a passionate environmental advocate. She was privileged to have served the public interest by publication of two accurate and up-to-date hiking guidebooks. She retired in 2007 after the printing of the 20th anniversary edition. The ICL honored her in 2004 as the Environmental Activist of the Year in the state of Idaho.

In 2011, the United States Forest Service, Wood River Land Trust and the-Idaho Conservation League designated the "Gloria Moore Osberg High Ridge Trail #147" in her honor. A bronze plaque bearing her name was placed at the 9,000-foot summit of this spectacular trail in the mountains of central Idaho.

She was preceded in death by a son, Scott Moore, parents Henry and Mae Miller, sister Goldia Bowersox, and brothers Raymond Miller and Richard Miller.

Those wishing to make a memorial donation in Gloria's memory, please consider a donation to the Idaho Conservation League, P.O. Box 844, Boise, Idaho 83701.

A celebration of Gloria's life will be held in the summer at the Newman Creek cabin.