Edmonds-Woodway graduation: Be there for one another 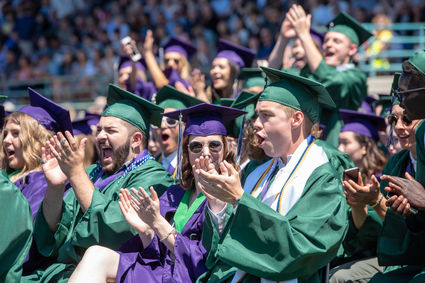 Friends, family and teachers honored more than 350 students from the Edmond-Woodway High School senior class of 2018 as they lined up in their caps and gowns and received their diplomas Saturday, June 16, at Edmonds Stadium.

Principal Terrance Mims welcomed students and guests, speaking of the possibilities that awaited the graduates.

Senior class president Nick Olson drew contrasts from life in 1938 to 2018. In 1938, America was just a few years from entering World War II, and the rights of women were limited.

Faculty speaker and Edmonds-Woodway Vice-Principal Geoff Bennett gave an overview of his career in education that spans decades. In his earlier years, he wasn’t sure if education was right for him, he said.

He considered going back to school to study journalism or law. But he got a teaching job, and now this year marks his last as an educator as he retires from E-W.

Bennett spoke of the traits that successful people share: honesty, hard work, and making the most out of every situation in life. He also spoke of courage.

“‘Courage is the first of human qualities, because it is the quality that guarantees all the others,’” Bennett said, quoting Winston Churchill. After his speech, Mims announced that the school’s clock tower would be named Bennett Tower in his honor.

The music students then performed an a capella presentation of the Beatles’ “In My Life.” There were various solos and good synchronization among the talented performers.

Student speaker Betty Abraham gave a particularly passionate and emotional speech to her classmates. She believed that people ought to be there for one another, no matter their differences.

She also gave a brief account of her parents’ migration to America from Ethiopia. Upon arriving, they both worked while raising three kids. She became particularly emotional when speaking about her grandmother, who still lives in Ethiopia. 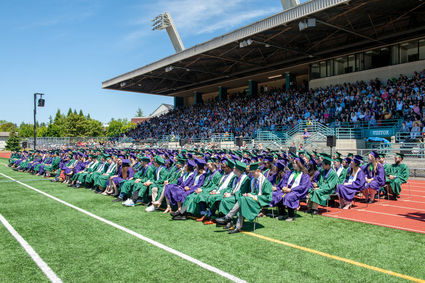 Abraham ended her speech by saying that walls weren’t built to keep her parents out of the country. “They took a plane,” she said.

Before receiving their diplomas, graduates received special recognition and applause for attaining high grade-point averages. They were awarded their diplomas by Mims and Edmonds School District Superintendent Kristine McDuffy.

After the students received their diplomas, students sang the E-W school school song before the changing of tassels.

Graduates were honored with a reception in the Edmonds-Woodway Great Hall.