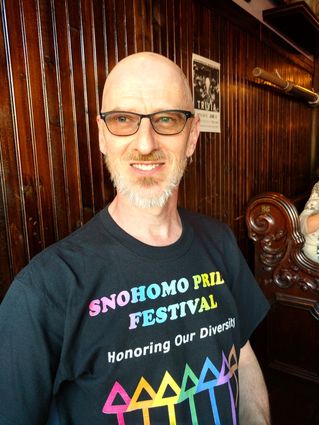 June and July have become very thoughtful months for me the last two years.

I’ve always liked the Fourth of July  I remember marching back and forth down my neighborhood streets in 1976, carrying my family’s flag, and of course there are the fireworks.

June is lesbian, gay, bisexual, transgender and queer (LGBTQ) Pride month. That’s a parade of a different sort, but one I relate to much more personally. Last year, the two paths crossed.

Edmonds does not have a Pride parade, but the city encouraged my wife and me to assemble an LGBTQ group to walk in the Edmonds Kind of Fourth.

That group, Pride of Edmonds, was over 80 strong  churches, youth groups, and Edmonds LGBTQ citizens and allies. We carried rainbow flags, but in front and highest, we carried the American flag. The overwhelming response of the parade watchers was positive, and extremely uplifting.

The experience really made me think about these two communities, LGBTQ and Edmonds. In rainbows and flag bunting, it demonstrated that they are not separate, that there is an LGBTQ community folded into the Edmonds community.

These thoughts return this year, framed differently. There is a conversation about how the largely white, largely lesbian and gay community treats the “B, T, and Q” communities, and how people of color in the LGBTQ community are treated.

There is no question that members of the LGBTQ community need to look at how we treat other members of the community, especially those who historically are less recognized or welcomed. Racism and other “isms” are not solely the province of the straight community.

We can do better, and we need to  I know I can. It is wrong when anyone is silenced or feels sidelined, but it is tragically shameful when that is done by a group that itself has been silenced and sidelined.

There are at least 40 different flags now used by different groups that all fall under the “LGBTQ” umbrella.

I was told that there are actually almost a hundred. They represent different degrees and aspects of gender identity, sexual orientation, relationship ideals, continuum or binary framings of the others.

Yes, there is a straight pride flag, too.

Self-determination is everyone’s right. Like anyone else, I can choose to identify with one of these flags. But we can never add all of those stripes to one flag, and there will always be another group feeling left out.

So what are we to do?

Almost everything I just said about the LGBTQ community can also be said of Edmonds. While we share much, we are not all the same. Yet we live amongst one another.

I am trying to look at others and see what we have in common and what we share before I focus on how we are different. Commonalities build connections, differences lead to isolation.

As Abraham Lincoln said, “a house divided against itself cannot stand.”

Brian Potter is a member of the Edmonds Diversity Commission  although he is writing this commentary on his own behalf  which is sponsoring the Pride of Edmonds picnic 2-6 p.m. Saturday, June 9. It’s at Hickman Park, 23700 104th Ave. W, Edmonds. Bring a dish to share or barbecue, as well as any outdoor games you’d like to participate in.