‘The Foreigner’: The accent is on funny at Phoenix Theatre 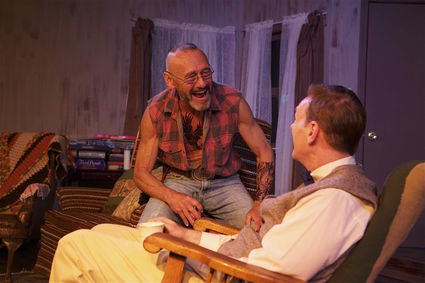 Michael McFadden, left, and Boyd Morrison star in The Foreigner.

Phoenix Theatre’s presentation of Larry Shue’s comedy classic “The Foreigner” is laugh-out-loud funny, though at times overly slapstick-ish in its portrayal of an anxiety-ridden Englishman who pretends he doesn’t speak English during his stay at a fishing lodge in rural Georgia.

The story  the final production of Phoenix’s 10th season  begins when the anxious Charlie Baker (Boyd Morrison) explains to fellow British soldier Froggy LaSeuer (Phillip Keiman) that his wife has been unfaithful at least 23 times, and her cheating could be caused by his bad personality.

He has trouble finishing sentences, and is terrified of speaking in social situations. Froggy’s solution is to have Charlie lay low at the lodge for a few days and pretend he’s a foreigner so he doesn’t have to interact with anyone. The plan backfires, however, as the locals do all they can to pry the newcomer out of his shell.

Director Eric Lewis, whose other productions include “More Fun than Bowling” and “The Last Romance,” skillfully orchestrates a cast of rural Georgians as they take turns trying to communicate with the newcomer.

The lodge’s owner, Betty (Melanie Calderwood), is ecstatic to have a foreigner staying with her, as she’s not able to escape rural Georgia. She thinks the best way to get him to understand her is by shouting at him.

“He just learned” ‘thank you’ today!” she says with glee to a fellow Georgian.

James Lynch returns to the Phoenix with a particularly energetic performance as the simpleminded hick Ellard. He takes it upon himself to teach the new foreigner English.

“Fo-work” he explains in a Southern drawl while holding up a fork. “Fo-work,” Charlie repeats in an accent that sounds Russian or Italian, or something else. “Sto-ove” he teaches while pointing at the stove. “Sto-ove” Charlie repeats. Ellard, excited at his progress, goes on to “teach” him more of the English language.

Debra Rich Gettleman plays the once-free-spirited but now newly pregnant Catherine, who is having trouble adjusting to the reality of soon becoming a pastor’s wife. She adds emotion and depth to the story, as she uses Charlie as a sounding board to vent. She assumes that he doesn’t understand what she’s saying. Charlie smiles and nods like he doesn’t understand.

Morrison (who when not acting writes New York Times bestselling thriller novels) shows dynamic range, playing both a fretting British wreck and a quiet, polite foreigner. His characters merge, however, as the Georgians pull him out of his shell.

This happens most vividly as he tells a story with his natural accent, using mostly made-up words, elaborate body movements and sound effects. The imaginative and preposterous nature of his story was fascinating. I couldn’t help but laugh.

Themes of racism and intolerance made some of the viewing uneasy, yet comedic overtones tempered it down. The show is intended for adults, yet is mild enough for older children with parental supervision.