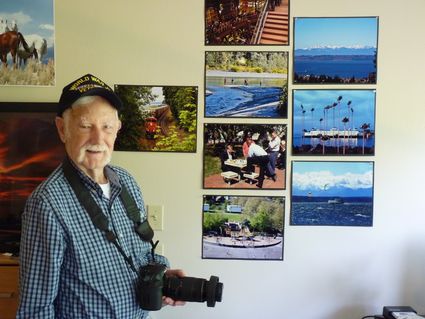 Dick Taylor stands in front of a wall in his apartment that displays some of the photographs he has taken. The photography hobbyist enjoys getting out to shoot landscapes and people.

Thanks to a good snowpack, Dick Taylor managed to get in some half-dozen ski trips this past winter.

Off the slopes, he has taken up ballroom dancing lessons; he and his partner recently performed in a talent show.

In between, he’s an avid photographer, and is often out shooting photos of the Northwest’s breathtaking landscape.

You just can’t slow the man down.

He is living the good life at FairwindsBrighton Court, a senior living community in Lynnwood. He’s a prime example of how to make the most of your retirement years.

A widower  he and his wife were married 67 years  Taylor admits he misses her every day. Still, life has never been better. “I’m just so happy,” he said. “All the time!”

It’s a common refrain among residents at Brighton Court, which feels much like living in a nice hotel. Arlene Christensen, for example, said that since she moved in 2½ years ago, “I never have a sad day.”

Christensen, who admitted to being age 39+, didn’t want to move into a senior living community. But her husband passed away in 2014 after the couple had lived in their Lynnwood home for 51 years, and she had a stroke, so she realized she would have to make some changes in her life.

A neighbor and longtime friend wanted to make sure Christensen didn’t move far, so she brought her to see Brighton Court, just six blocks away from her old neighborhood.

She began exercising, got a Fitbit, walks 10,000 steps each day, likes to bowl, and lost more than 30 pounds.

Known as “the Purple Lady,” Christensen is quite the fashion plate. The closet in her apartment is filled with purple attire; in fact, the apartment itself is decorated with a heavy purple palette.

At a recent ladies’ night at Brighton Court, Christensen was asked to talk about her fondness for purple. It began in a troubled childhood when she had a sibling who repeatedly disparaged her.

Then one day, she was wearing a purple blouse, “and people would tell me how pretty I was.” That was the beginning.

“It changed my life,” Christensen said. “I went from a nothing person to one who had found my way.”

At Brighton Court, even residents who can’t remember her name know her as the Purple Lady, and enjoy her positive attitude.

Christensen said it’s easy to keep that positive outlook at Brighton Court, in no small part because of the staff. “The staff here is unbelievable,” she said. “You can ask them for anything.”

Taylor agrees. “The facility has all I need,” he said. “And the neighbors are fun.”

Taylor’s days are so full, however, he barely has time to visit with his neighbors  unless they’re on the go with him. For example, he recently took a Freedom Honor Flight to Washington, D.C., organized for veterans to see the memorials that stand in their honor.

He and his wife Eleanor used to dance a lot at the Lake City Elks Lodge, and he decided he needed a refresher course, so he has been taking lessons at Arthur Murray. He and his dance partner, Jeanie Bly, showed their stuff at a recent talent show at Brighton Court.

“It’s not the worst thing in the world to stand there with your arms around a pretty woman,” he smiled. Mainly, Taylor advised, keep moving. “Mobility is everything.”

Formerly a principal at Seattle’s Queen Anne School, he demonstrated the value of being light on your feet all the way back in 1960 when he and a co-worker spotted a 16-month-old baby hanging out a third-story window, and Taylor raced over to catch the falling boy in the nick of time.

Looking back on that life-saving incident and other events, Taylor says the most satisfying memories are about making a difference in people’s lives.

Now, on those rare occasions when he does slow down, Taylor likes to banter with the Brighton Court staff. “The main thing is the staff,” he said. “They’re just wonderful.”

Jackie Requa-Hall, the general manager at Brighton Court, agrees. It was one of the first things she noticed when she came to work here. “We’ve got a great staff here, a great team,” she said. “Everybody is happy and engaged. It makes it fun.”

But she’s impressed by the attitudes among the residents as well. “The residents here are really active,” Requa-Hall said. “They’re out, and they’re active.”

Brighton Court has 182 apartments, including studios, one- and two-bedroom units, for both independent residents and those needing some assistance. Dinner is included in your rent. Chefs prepare fresh, seasonal menus designed to appeal to every taste bud.

There also is a bistro where residents can enjoy egg sandwiches or other fare in the mornings and, of course, beer and wine during the afternoon happy hour. 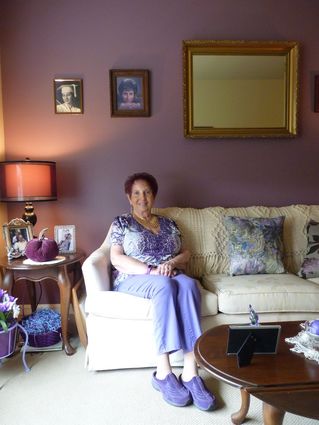 Arlene Christensen, known around FairwindsBrighton Court as the Purple Lady, sits in her living room where, not surprisingly, the color purple plays a dominant role in her interior decorating.

For those residents who no longer drive, a bus and SUV are available for trips to the store, doctor appointments and other chores. A concierge helps schedule trips downtown or to the airport.

Or how about a talent show? Chances are you’ll see Dick Taylor and Jeanie Bly tripping the light fantastic. Don’t want to sit alone? Look for the Lady in Purple; she’s delightful company.