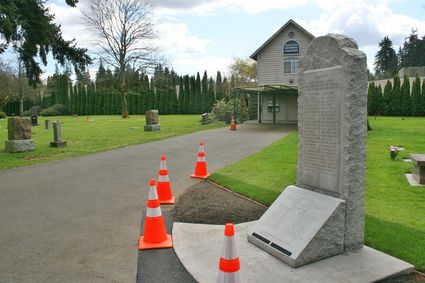 The Edmonds veterans memorial monument has found a new home at the Edmonds Cemetery.

The south Snohomish county veterans memorial monument has found a new home, just in time to celebrate its 70th anniversary on Memorial Day.

No longer at its longtime location in downtown Edmonds, it was recently reinstalled at the Edmonds Memorial Cemetery and Columbarium in Westgate.

Each year on Memorial Day, veterans are remembered at the well-attended ceremonies held at cemetery. This year, tribute will be paid to the men and women who served during the post-9/11 era, with special honors to those who lost their lives during the many conflicts during those years.