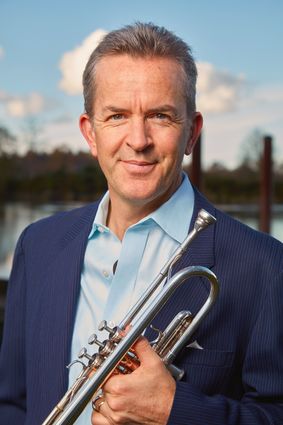 The idiom, expressed in a play by George Bernard Shaw, goes something like this: Those who can, do. Those who can’t, teach.

“I don’t like that myth,” said Jake Bergevin, director of bands and department chairman at Edmonds-Woodway High School, where he teaches three concert bands and three jazz ensembles.

“I don’t know a famous jazz musician who doesn’t teach. All of my favorite recording artists are professors at colleges.”

If you live in Edmonds and have had a student musician over the past 19 years, you know and respect Bergevin, who has taken the school’s jazz ensemble five times to New York as finalists in the “Essentially Ellington” contest.

Last month, at the Lionel Hampton Jazz Festival at the University of Idaho, two large ensembles from E-W  the Jazz Ensemble I and Jazz Ensemble II  were named winners in the AA High School Instrumental Ensemble division. Bergevin directs both.

And, with apologies to Shaw, Bergevin can play the hell out of what he teaches.

You can see for yourself Thursday, March 15, when Bergevin performs as part of the “Music at the Library” series in Edmonds. Bergevin, a vocalist and trumpeter, will front a trio with guitarist Milo Petersen and bassist Rodney Ocfemia, the latter a senior at E-W.

Although in a trio at the library, Bergevin is often heard fronting the Javatown Swing Orchestra.

“I’ve been playing with these guys for nearly 30 years, since before college,” he said. “We primarily play at private parties, in addition to the Ellensburg Jazz in the Valley Festival for 17 years. We’re eight guys, like a mini-big band, with two trumpets, saxophone, trombone, string bass, drums, guitar and piano. People like to use us when they want the big band-era sound, but don’t want 20 guys at their party.”

Sounds perfect for Edmonds’ Summer Concerts in the Park, but Bergevin has never performed during the annual series. He admits it would be fun.

Bergevin also is known for his commitment to the Great American Songbook, and recently was guest vocalist with the Spokane Jazz Orchestra and the Tacoma Symphony.

As you’d expect, Bergevin cites Miles Davis and Louis Armstrong as influences  the first trumpet solo he learned, at age 10, was “Hello, Dolly,” which Armstrong made famous.

Bergevin graduated from Lake Washington High School in Kirkland, where his band teacher was Gary Evans, who still performs as leader of the Gary Evans Collective. The choir director was Kirk Marcy, now doing the same for Edmonds Community College’s Soundsation.

“Most music schools in the area force people to choose (between an instrument or vocals), so I was thankful to go to Central, where they encourage you to do both.”

Bergevin has released two CDs, “My Name Is Jake” from 2003 and “Holding Back the Dawn” from 2007. They feature jazz standards, but also original tunes he composed on the piano and guitar.

He agrees that it’s time for a new CD, but

“That would be really fun,” he said. “But I’m not sure anyone is going to make anymore CDs. Nobody buys them anymore, but I do have some loose plans to get started (on releasing new music).”

Bergevin certainly has plenty on his plate.

“We have a thriving jazz community in the Northwest, thanks to a lot of teachers who have come before me,” he said. “That’s the main force of jazz now, the educational system. The audience has dwindled so far, but student participation is still thriving.”

When presented with the thought that playing jazz in high school is like playing soccer  many participate in school days, but not much after  Bergevin did not agree.

“It’s similar to soccer that there’s a driving force of enthusiasm and competition at the educational age. But unlike soccer, there are people in the 80s and 90s who still enjoy playing jazz. And there’s not a lot of 80- and 90-year-olds running around playing soccer. Music is for life.”

Bergevin has two other gigs coming up.

On April 26, he performs in a quartet at the Edmonds Center for the Arts before a screening of “Breakfast at Tiffany’s.” It’s part of the center’s Film Cabaret series  he’ll be joined by Milo Petersen on guitar, Michael Glynn on bass and Brad Boal on drums. Tickets are $10, or $15 for the movie and performance.

On May 5, Bergevin will be the guest artist with the Seattle Women's Jazz Orchestra for a concert at Shorewood High School’s Performing Arts Center. Tickets are $20, with reduced pricing for students and seniors.

“I’m thankful to get play in the area,” Bergevin said. “I’m grateful to keep playing with adults, in addition to what I’m doing in school.”