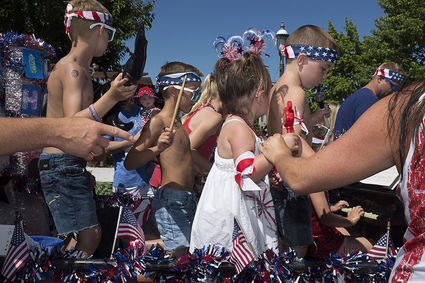 Minh Carricos image of a group gathered before the Edmonds Kind of Fourth childrens parade is one of several on display at the Edmonds Library.

What do you see when you look at a photo? What draws your eye?

An exhibit at the Edmonds Library just may change the way you look at photos  at least the ones taken by Minh Carrico in “Upon Arrival.”

“The is the exhibit where I’ve showcased some of the images I’ve taken around Puget Sound for the better part of 10 years,” said Carrico, co-chair of the visual arts department at Edmonds Community College since 2007.

“Most of my work is reflective or looking back. My process has been just to take a picture and don’t think about it. I look at them later to see what I’ve g...