Through the years: Fads, trends and craziness 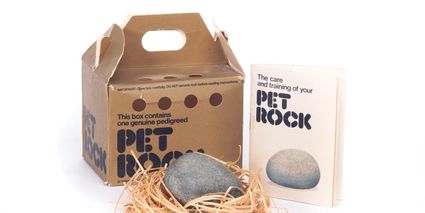 Fess up: Who among you spent money on a pet rock?

With the passage of time, this country has experienced numerous interesting fads and trends. It seems as if most of these had beginnings in the late 1950, the 1960s and the early 1970s. Or, perhaps I just noticed it more during those years because that was the time my four children were growing up.

Thankfully some of the really crazy fads and trends that seemed to appear out of nowhere, soon faded away. You may recall a few of these. And maybe a bit of the craziness.

In the mid and late 1950s, we had poodle skirts, hula-hoops and Frisbees. Of course, Frisbees are still popular. They provide good exercise  mainly for your dog.

Soon, rock ’n’ came along, as did Fess Parker and the coonskin cap.

A few years later, in the 1960s, we learned the “Monster Mash” and we began to “Twist” with Chubby Checker. Panty raids and the Age of Aquarius made a short appearance in our culture. Do you remember flower power, lava lamps, love beads, mini-skirts, Nehru jackets, tie dye, turn on, tune in and drop out?

How about the Watusi, surf music, psychedelic rock and heavy-metal music?

In the late 1960s and early and mid-1970s, along with Cher, young ladies flash-backed to Navy sailors and discovered bell-bottoms were fun. Mood rings made a debut. We were introduced to waterbeds, leisure suits, punk rock, disco, safari jackets and even hot pants.

Among the silliest of fad-collectibles were the mid-1970s pet rocks. This craze lasted about six months, and made several million dollars for the inventor, advertising executive Gary Dahl. I had my own experience with rocks in the year 2000 (mine were not considered pets).

I had painted some small flat rocks with the characters from “Peanuts”  Charlie Brown, Lucy, Snoopy and Linus. I had them on display in my front yard and, within a couple of days, someone stole them.

College students seem to have been the instigators of some of the decidedly more offbeat fads. A few contributions from the college students were swallowing live goldfish and seeing how many people could stuff themselves into a Volkswagen Beetle or a telephone booth.

Perhaps their professors didn’t give them enough assignments, leaving them with a lot of free time on their hands. At least, it was silly and innocent fun.

Even the famous Barbie, more or less, started as a fad. But Barbie, along with her family, her friends, her clothing, her car, her other possessions, and even her career, has remained with us for almost 59 years  truly a marketing success.

It is hard to believe that Barbie made her debut March 9, 1959. Barbie and her successful journey through the years has brought to life other dolls, but none has ever reached her fame.

The birth of a different kind of doll in 1978 did cause a big flurry; those adorable Cabbage Patch Kids are still with us.

One of our later and still popular fad-collectibles has been the Beanie Babies. First known in 1983, Beanie Babies became famous in 1993 and are still very profitable as collectibles.

Often, when I conduct research, I turn to the old newspapers. At times, I can become distracted by a completely different discovery. This is what happened to me recently. While doing some research in the 1974 newspapers, my eyes fell on an article about a fad I had mostly forgotten  it is probably one of the most bizarre.

With its beginnings on college campuses, and then with other people who evidently wanted to exploit themselves, we were subjected to what became known as “streaking.” Streaking not only found its way into most corners of the United States  it even traveled across the Atlantic Ocean to England.

For those too young to have known about this extremely odd craze, streaking involved racing through public places without a stitch of clothing, evidently in order to surprise and offend the public. Disrupting formal occasions in order to get a laugh seemed to be the major aim.

Time magazine was one of the first to introduce the world to this odd cultural activity. In December 1973, the magazine described streaking as a “growing Los Angeles-area fad.” Maybe it had an early beginning there, but it certainly spread fast.

In February of 1974, the University of Virginia reported unclothed students running on the “lawn,” and another evening the same month first-year students were reported to have staged a “mass streak.”

In 1974 during the Academy Awards, with a worldwide TV audience looking on, a male streaker ran across the stage and flipped the peace symbol to co-host David Niven while he was introducing Elizabeth Taylor.

Always debonair, David Niven’s quick-witted and uncomplimentary response to the interruption is remembered as one of the showstoppers of all times.

Social commentators speculated about the reason for the strange activity of streaking; most thought it was just another fad, like goldfish swallowing or packing bodies into cars and phone booths.

Most streakers seemed to be male, but at times a few of the braver young ladies did join in the activity.

One truly different event did happen in Florida  a nudist colony changed its regular course and streaked through town  wearing clothes. A song written and performed for the craze was “The Streak,” and it stayed on the best-seller list for three weeks.

In the winter, most of the streaking was done at warm-weather events, but even the colder places, such as below-zero Alaska and Northern Canada, saw a few brave streakers taking part in the fun.

In our own locality, this strange behavior did not amount to much, but some streakers did appear in the Edmonds, Lynnwood and Mountlake Terrace. The local Edmonds Tribune-Review on March 13, 1974, reported that some streakers struck in south Snohomish County the week before.

The only arrest made was on Friday night, when two officers “observed a car driving through a parking lot of a store on Highway 99 with five ‘unclad suspects’ on the roof of the vehicle.”

Officers stopped the man’s car as it was heading north on Highway 99. The five unclothed 15-year-old juveniles ran from the police.

“One was apprehended and the clothing of the five was confiscated,” the paper reported.

The explanations to their parents must have been interesting. Police charged the driver, a 22-year-old local man, with “allowing persons to ride outside the vehicle.”

The newspaper also reported that six males were sighted streaking in the area of Third Avenue and Main Street in Edmonds, but no arrests were made. In Lynnwood, there was a report of a streaker at a drive-in restaurant.

In Mountlake Terrace, police received two complaints regarding one Saturday sighting. A man wearing only a red stocking cap had streaked in and out the back door of a restaurant in the town.

There were some unconfirmed reports of some additional streaker-sightings in south Snohomish County, but evidently very few of the young people in our local neighborhoods joined in the craziness that swept through the country.

Streaking soon come to an abrupt end  maybe because most of the participants were no longer finding new ways to startle the public.

Or, perhaps, as one writer mentioned, it was almost time for college finals, and the students had plenty of studying to tackle.