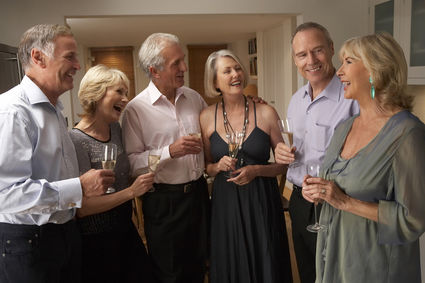 Who knew? Turns out moderate drinking can have a positive effect on your health, while either of the extremes  excessive drinking or total abstinence  can increase your risk for serious health issues.

Seniors and drinking? It’s not all bad news. If you’re confused about “social drinking” and “moderate drinking,” you are not alone. By a certain age, and experience, we already know how many is too many. But what about a glass of wine with dinner, a birthday glass of champagne or that can of beer at the barbeque?

According to the American Medical Association, a recommended alcohol limit for women is five glasses per week. Men on the other hand, with a heavier build, can extend that limit to seven. These are units of alcohol, one glass of wine, one shot in a cocktail or one can of beer. These figures assume you are reasonably healthy, have no liver damage, and no medications that could influence the effect of alcohol.

The federal Food and Drug Administration reinforces this standard for “moderate drinking” for men and women, as explained in their “Dietary Guidelines 2015-2020.”

Furthermore, supporting studies now suggest that alcohol in moderation has a positive effect on your health, but a life of complete abstinence can increase your risk for serious issues like heart attack and stroke. By the same token, continuing to exceed those suggested limits, or binge drinking, can raise your risk of cancer.

The American Association of Retired People (AARP) highlights some key, long-term studies done by the universities of Texas, Kentucky and Maryland. Their findings showed that those who had one or two drinks per day were better at recalling facts and events than those who never drank.

Also at the AARP website are remarks by Dr. Sam Zakhari, senior vice president of the “Distilled Spirits Council, (DISCUS) and former director of the National Institute on Alcohol Abuse and Alcoholism. Dr. Zakharis’ research report in the “Journal of Alzheimers Disease” states that, “Drinking in moderate amounts throughout your life can actually ward off cognitive decline and improve brain function.”

The U.S. Center for Disease Control and Prevention comments further on Dr. Zackharis’ findings by stating, “Alcohol has a blood thinning quality which can actually prevent a stroke caused by a clogged blood vessel. Furthermore, if a clot does happen, alcohol can help with fibrinolysis and the dissolution of the clot.” This is really good news for those who worry about a heart attack.

What about our friends who say, “I need a drink before bed every night to get to sleep.”?

David Sack, MD and CEO of “Promises Treatment Centers” explains this misconception. “Alcohol is a somnogen, or sleep inducer, and can disrupt your sleep later in the night.” And, that’s the problem.

”What tends to happen is that alcohol works less and less as a sleep aid over time, so we respond by increasing our drinking.” Remember, drinking that glass of wine is only beneficial to your health if you keep within the suggested limits.

And now, the good news for seniors. On Sunday, Aug. 20, 2017, the Seattle Times published an article by Melissa Healy entitled “Drinking for Your Health.” She cited studies with eight years of follow-up and came to an interesting conclusion.

“Older people, especially women, who drink in moderation, are less likely to die of any cause than those who abstain or those who drink heavily.”

This was a real surprise. “Heavy drinkers, those exceeding the suggested alcohol units per week, had a 45 percent higher risk of death, not by heart failure or heart attack, but of cancer.”

And finally, the very latest research, published Aug. 28, 2017, by the American College of Cardiology, reported that, while heavy drinkers raised the death rate of all causes from heart attacks and some cancers, the final conclusion from this exhaustive study with 333,247 participants was, “Moderate drinking has a pronounced protective effect on people over 60 years old.”

To drink or not to drink? Most of us made this personal decision years ago, and now you don’t have to feel guilty about your choice. CHEERS!