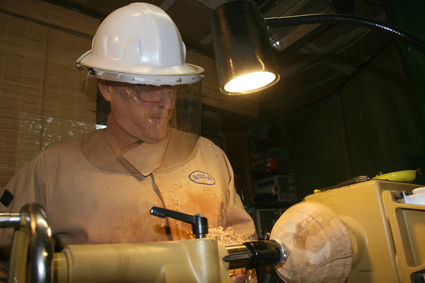 CUT-StudioTour2Rick Davenport works on a new creation at his studio in Edmonds. You can catch him in action during the Edmonds Art Studio Tour.

Rick Davenport spins odd shapes of wood with a sharp tool on a fast-spinning lathe from his studio in Edmonds’ Seaview neighborhood. His eyes focus intently behind a face shield as he crafts his creations, wood shavings tumbling onto his arms and pirouetting to the floor.

After a brief demonstration, he points to a window behind him. “We’ve replaced all the windows in the house. But not that one. I’m going to blow it out. It’s not a matter of if  it’s when.”

Such is the life of a wood turner.

You can catch Davenport in action this Saturday and Sunday, Sept. 16-17, during the 12th annual Edmonds Art Studio Tour. Professional artists in and around Edmonds will open their studio doors for the free, self-guided tour of 19 private studios displaying the work of 31 local artists.

Five galleries also will have demonstrations: Cole Gallery, ARTspot, Gallery North, Randall J. Hodges Gallery and Re-Juiced Studio. Visit the tour’s website at http://www.EdmondsArtStudioTour.com to preview the participating artists and their work, download a map of participating studios, and find links to each artist’s website.

Artist Sue Robertson, who helped start the tour along with Tracy Felix  who both will be opening the new Graphite studio at Second and Main  will be showing her work at Joyful Art Studio at 745 Fir St.

“Even if you are not aware of a particular interest in art,” Robertson said, “come visit the studios during the Studio Tour. You never know if you might awaken something within yourself that wants to create.

“If you have an interest in being creative, come see all different types of art and talk to the artists about their process. It might help you identify what you would like to try. In a few years, you might be on the Studio Tour yourself.”

Rick Davenport’s Not So Dull! Wood Turning studio, run out of his garage, is at 8005 190th St. SW. He’ll have two tents in his driveway, one featuring Mary Bess Johnson, who will display and sell her undersea photography.

It’s in his studio where Davenport says his wood talks to him. Not in a nagging way, or in spiritual tones, mind you.

“I treat it as kind of a collaboration,” he said. “One of my mentors years ago said what you do is draw up a plan, then you execute it. I tend to take odd pieces of wood on the lathe and work with them.

“We have an adventure. It will tell me sometimes  it will have other plans than I started with. Other times, it talks with a funny sound  then I need to stop.

“Quite often, a piece looks beautiful, but it’s ready to explode. The wood will suddenly say that something’s wrong here. And that’s why I don’t wear headphones. I’ve got to hear what’s going on.”

This weekend’s studio tour will be Davenport’s 11th. He only missed the first year. He’ll have pieces for sale, and will probably do a wood-turning demonstration or two. You also can find his work at ARTspot on Main Street in Edmonds, where his handmade pens are for sale, and on most Saturdays during the Edmonds Summer Market.

Indeed, Davenport is a fixture at the farmers market. “I’ve been there long enough that I know the people there,” said the 62-year-old. “I grew up in Edmonds.” 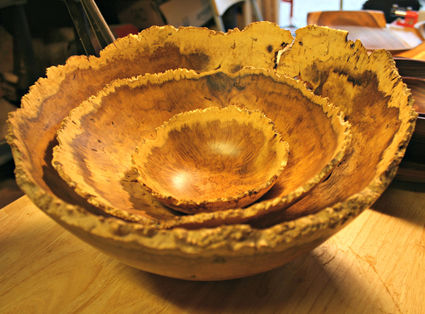 Yes, he took woodshop  in junior high (now the Edmonds Center for the Arts). “I didn’t use the wood lathe in woodshop. It’s kind of intimidating. If you don’t know what you’re doing, you could have some explosive results.”

Davenport worked in sales for most of his adult life. “It was a rat race. I was good, but I got very tired of it.”

This is his 13th year of being a wood-turning artist full time.

He much prefers listening to his wood.