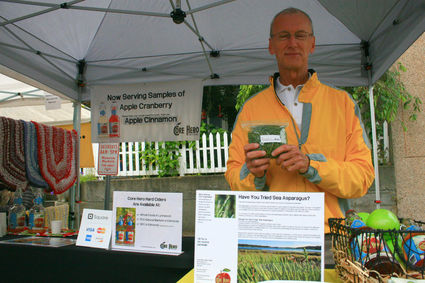 There’s always a crowd around Steve Kaiser’s Core Hero Hard Cider booth at the Edmonds Historical Museum’s Summer Market, which debuted last Saturday for its 23rd season. But Kaiser offered something new for his third year as a vendor, a herb that few have heard of: sea asparagus.

Some brave visitors gingerly picked up samples of the annual herb  also known as pickleweed, samphire greens, sea beans, glasswort and sea fennel  and munched it raw. Opinions were mixed, but surprisingly positive.

After all, Kaiser's samples were raw and meant mostly for display purposes. Sea asparagus is salty, and only in season for about six weeks.

“To my surprise, many people tried the herb raw, and 90 percent thought cooking it was unnecessary,” said Kaiser, who lives in Edmonds. “I'm in the minority  I prefer it soaked in water, blanched and sauteed.”

On Sunday, Kaiser emailed to report that the asparagus sold out.

“I'm going back to Lopez this week, and will pick at least three times as much for the Edmonds and Lake Forest Park markets next weekend. The level of interest exceeded my expectations, and it was fun to see so many adventurous people willing to try something new.”

Kaiser said sea asparagus is popular in Vancouver, British Columbia, and is starting to draw interest in Seattle’s trendiest restaurants. And now, in tres chic Edmonds.

How does Kaiser gather his bounty?

Well, he gets on his hands and knees to pick the sea asparagus that grows wild near a small apple orchard he manages on Lopez Island.

“If properly prepared, it goes very well with seafood, pasta, mixed with mashed potatoes, raw in salads, and pickled,” he said. “It’s not similar to regular asparagus. It’s something different. That’s why people like it.”

Here’s Kaiser’s quick-tip recipe: “Sea asparagus is salty and slightly bitter when raw. I recommend you soak it in water for about one hour to reduce the saltiness. After soaking, blanch in boiling water for one to two minutes and immediately submerge in ice water to stop the cooking and prevent discoloring. Then, either saute with reduced hard cider or with garlic and butter.”

Regular market-goers may be new to Kaiser’s sea asparagus, but many are familiar with Kaiser’s cider, which he brews in his garage in the Bowl, meeting all regulations and license requirements.

He distributes it locally to QFC and PCC (Edmonds and Bothell) and Whole Foods in Lynnwood.

In addition to his orchard on Lopez Island, Kaiser also has a small orchard in Edmonds.

Other vendors at the Summer Market

There is a lot to chose from at the Summer Market.

Caruso Family Farm is a favorite, as the family brings many fresh vegetables from their farm in Snohomish. Expect colorful displays.

Frog Song Farm is a longtime staple. This season, the fanciful vegetable display moves from Fifth Avenue North, near the Rusty Pelican, to the top of Bell Street near Sixth Avenue North. This new location gives the booth more room to spread out.

New this season is Sea Fire Gourmet, where hot sauces come in three distinct varieties. All sauces are made from hand-picked chili peppers from farms in Yakima.

There is always an array of flowers, glass, textile arts, jewelry, wood carvers and many other talented people who offer their wares at the market.

Food vendors are plentiful, too, and the museum has an information booth at the plaza in front of the museum.

Unfortunately, the market’s white elephant table is absent this year.

“This is an action greatly regretted by the Edmonds Museum board and the market committee, but the action was needed as there was a two-fold problem,” market publicist Bette Bell said.

“The storage area under the stadium at the Civic Park is on the city's list for removal, and although the date is still in question, we could not have our storage area filled with donations, and then be asked to vacate with no storage space available. We would need a good size garage space to accommodate our usual collection, of trash and treasures, and none was found. 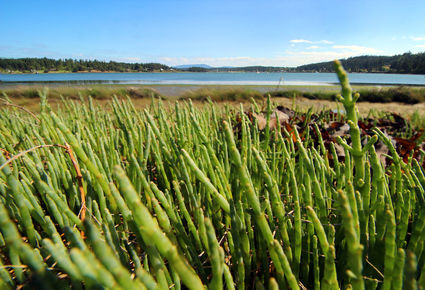 Core Hero Hard Cider harvests wild sea asparagus from Lopez Island, where apples also are grown for the handcrafted cider made in Edmonds.

“The second reason, and really the most significant, is that we could not find a couple, or two volunteers, with strong backs to spend their free time, keeping the white elephant table in the market. Younger folks are needed to carry on; younger meaning retired, having some free time on Saturdays, and the interest to work with a great group of museum volunteers.”

One thing that remains  the Market has a no dog policy, both for the benefit of customers and the dogs.

“A busy market is not a fun outing for pets, and can cause unnecessary stress for everyone,” Bell said. “We do love dogs, and we do love people who love dogs. Many of us are pet owners ourselves, but it is not a good mix in a bustling market environment. Our goal is for everyone to have a pleasant visit, and be able to look forward to returning on the following Saturday.”

The Edmonds Museum Summer Market is 9 a.m.-3 p.m. Saturdays, except Aug. 12 during A Taste of Edmonds, at Fifth Avenue North and Main Street. It runs through Oct. 17.