Memorial Day: Some gave all 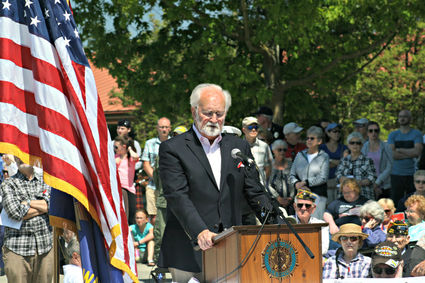 More than 1,000 people gathered under clear blue skies on Memorial Day at two Edmonds locations to remember those killed in war.

This year’s theme was a “Welcome Home” for Vietnam veterans.

All the many symbols of a military service were present, including an invocation, presentation of colors, pledge of allegiance, the national anthem, “America the Beautiful,” “God Bless America” and a performance of “Stars and Stripes” by Mike Barber on bagpipes.

It was Edmonds residents Ron Clyborne and Jim Traner, both Vietnam War veterans, who began the three-year push to bring the Edmonds Veterans Plaza to fruition. They both wanted the city to have a place for all veterans  past, present and future  to gather.

Edmonds did not have a veterans memorial in place, save for a large rock in front of the police station and a monument by the Edmonds Historical Museum. (The monument will be moved to the cemetery later this year.)

The Plaza is located on the grounds of the Edmonds Public Safety Complex at Fifth Avenue North and Bell Street. It is a joint project of the Edmonds posts of the Veterans of Foreign Wars and American Legion and the city of Edmonds.

After his emotional speech, where he said he “finally felt like he was home,” Reagan presented Sydney Smith Zvara with a drawing of her father. Stuart H. Smith was a frogman in World War II. Sydney's sister, Heidi Smith, was unable to attend.

Still to come at the plaza is an information kiosk and a statue commemorating military working dogs, the latter expected in July.

For more pictures, go to two posts (here and here) of the Beacon's Facebook page.