What goes around comes around: Multigenerational living on the upswing 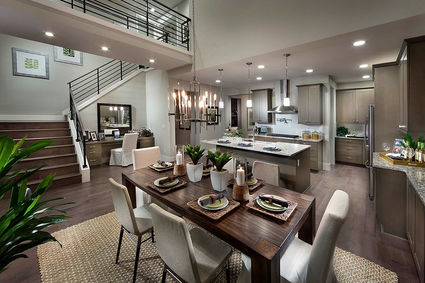 Among the options offered by Quadrant Homes for families interested in multigenerational housing is one that includes a catwalk, above, that leads to a master bed/bath, providing a private retreat for long-term house guests.

“The Waltons,” a popular 1970’s TV show based on the book “Spencer’s Mountain,” over nine seasons recounted the story of the Walton family eking out a living in rural Virginia during the depression and WWII.

The story revolved around John Boy, the narrator, who lived with his six siblings, their parents, and grandparents. Three generations under one roof.

Fans may remember each episode’s traditional closing scene, a nighttime view from the outside of the darkened family home when just a few upstairs bedroom lights are on, some members of the family are discussing the events of the day before bidding each other goodnight, and the lights click off, one by one.

It oozed nostalgia for a time when multiple generations lived on the farm, older family members shared their guidance and wisdom, and younger members took on more responsibilities, including caring for their aging loved ones.

Urbanization and industrialization contributed to the breakup of those traditional families, and by the time the boomers came along, it was a given that they would grow up and leave the nest to strike out on their own.

But a funny thing happened on the way to the 21st century. Multigenerational homes are making a comeback.

According to the Pew Research Center, the share of the population living in multigenerational households declined from 21 percent in 1950 to a low of 12 percent in 1980. It’s been trending back up ever since.

Pew reported that in 2009 about 17 percent of the population lived in multigenerational households. By 2012 that population had grown to 18 percent, and by 2014  the last year data was available  the total had grown to 19 percent  a record 60.6 million people.

The revival of multigenerational living can be attributed in part to cultural preferences. Hispanic and Asian populations, and some other cultures, have increased in America, bringing with them traditions that prize families, respect elders and value the contributions that each member of the household brings.

The Great Recession sparked a sharp increase in the trend, as grown children who lost their jobs had to return to their parents’ household, college graduates couldn’t find good paying, full-time jobs, and boomers took on the care of their aging parents.

According to local experts, the trend continues here in south Snohomish County as well.

Among those who are making it work are Mill Creek Beacon editor Dan Aznoff’s family. They have four generations living in a three-story Mukilteo home. Initially, he said, he and his wife Susan were looking for a small home with a view for the two of them. They planned to find a condo for Susan’s mother nearby.

At the same time, one of their daughters, her husband and two kids also were shopping for a home in the south Snohomish County area.

When they came upon a 6,600-square-foot home in Harbour Pointe in the fall of 2015, the pieces fell into place.

“We each have our own floor, our own kitchen, our own laundry,” Aznoff said. “ and our own dog.”

There are obvious financial benefits. Aznoff said they are the stereotypical “Costco family.” They need fewer cars now. And even though each floor has its own kitchen, they dine together at least 4-5 times a week.

“It’s been a blessing to support each other,” he said.

However, the Aznoffs had to do some remodeling  the home is now over 7,000 square feet  and they’re not done.

That’s similar to the problems others are confronting as they look at existing housing, typically single-family, two-story homes that don’t necessarily work for multigenerational living.

Too few bathrooms or bedrooms. Too many cars for the garage. One kitchen and many palates. So extended families are building additions or looking for new homes.

Fred Baxter, an architect in Mukilteo, said he’s seeing an increase in requests to meet the particular needs of extended families.

He’s juggling work for several clients, ranging from a new home designed for multigenerational living to a separate, mother-in-law type dwelling unit to a master suite addition for an older family member.

Sometimes, Baxter said, smaller cities aren’t caught up with the trend, so zoning and other code restrictions limit residents’ options.

Dennis Howard of Edmonds Realty said they, too, are seeing the trend toward multigenerational living. But the housing supply, for both purchases and rentals, is so tight that options are rare.

“Part of the problem is this is just a good place to live,” Howard said.

Older homeowners looking to downsize can’t find a satisfactory alternative, and buyers looking for homes that meet their multigenerational needs want a master on the main floor or, better yet, no stairs for their aging parents to navigate.

However, builders are responding. Large builders like Quadrant Homes and Toll Brothers are offering options in their new homes to meet the needs of multigenerational families.

Kelley Moldstad, division president at Toll Brothers, said they “increasingly are getting requests for home designs that accommodate several generations under one roof.”

“As this trend grows, we will continue to build homes designed to meet the changing lifestyles of our clientele, including those who favor multigenerational living,” Moldstad said.

Michelle Pruitt, director of marketing for Quadrant Homes, said about half the requests they’re getting today are to meet multigenerational living needs; that number grows to 75 percent on the eastside.

Responding to those requests, Quadrant offers “flex options” to buyers of new homes.

For example, while the home’s “footprint” remains the same, a buyer can request that the downstairs home office or upstairs bonus room be turned into a guest bedroom with an attached bath for long-term guests.

With 48 years of home construction experience, Quadrant is able to offer a range of options that don’t require new permits or otherwise delay completion of a home, Pruitt said.

A lot of their buyers are Asians or other immigrants with engineering and tech skills that are in high demand in Seattle, and they want homes that will accommodate extended family members who may visit for months at a time.

To be sure, multigenerational living isn’t for everyone. In his Mukilteo home, Aznoff and his son-in-law are outnumbered by five women. His wife, Susan, mother-in-law, daughter and granddaughters are increasingly close. “There’s a lot of estrogen in the house,” he laughed.

“My biggest challenge is everybody wants to be with Susan, so sometimes I feel I have to get in line to be with my wife,” he said.

And quiet moments are rare. “It’s a joy having them here every morning,” he said. “But there’s a need sometimes for some tranquility.”

Overall, everyone’s adapting. Aznoff said when they bought the house, his daughter’s family planned to live there only until the girls started school.