Dig out those LPs; there’s a vinyl revival going on 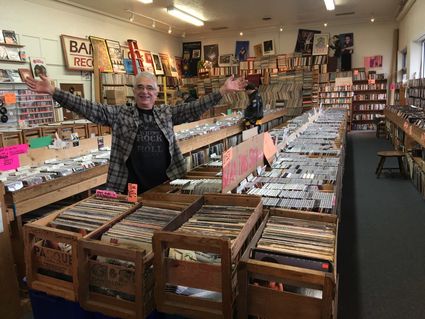 Gordy Arlin, owner of Bargain CDs Records & Tapes at 2501 Broadway, Everett, said music lovers are rediscovering the magic of records, part of a vinyl revival thats underway across the U.S.

Tucked away in closets, garages and storage units across the land are a whole generation’s memories. They’re on 12-inch, flat discs of vinyl, the soundtracks of baby boomers’ lives and loves.

Music was such an integral part of that generation’s culture that, even as records gave way to 8-track tapes, then cassettes, then CDs, then digital downloads or streaming music, many boomers couldn’t bear to part with them. The turntables, amplifiers and bookshelf speakers were donated to charity or sacrificed at garage sales, but the records stayed (Except for mistakes like Tiny Tim’s “Tiptoe Through the Tulips”  What were we thinking?!).

As musicians and their fans adapted to the new technologies, record manufacturers shut down operations and record stores closed their doors.

So who would’ve guessed that a whole new generation would come along and, largely because of “the cool factor,” help create a vinyl revival.

The millennials  the generation that entered adulthood around the turn of the 21st century  are largely credited with driving the revival. In some cases, they found the records their boomer parents had saved, and discovered the warmth of analog  scratches, hisses and all.

In the last few years, the highest-selling albums have been buoyed by both boomers and millennials. Some are heavy on nostalgia, with remakes of Led Zeppelin, Bob Dylan and the Beatles, while others showcase modern acts like Arctic Monkeys and Ty Segall.

In fact, Nielsen reported in 2015, “Sales of vinyl are actually increasing at a rapid clip. Vinyl album sales in the U.S. have grown a whopping 260 percent since 2009.”

Gordy Arlin, owner of Bargain CDs Records & Tapes in downtown Everett, said that, for older people especially, records are wrapped in memories. When they come into his store and flip through the stacks, those memories are revived. “Oh, I bought this one when I had my first kiss.” “I was listening to this when my draft notice arrived.”

Records also come with cover art, photos, lyrics and stories. They list musicians’ names and the instruments they played on each track. Musicians often sweated over the order of the songs, how each side begins and ends. It’s an immersive experience.

Arlin, a musician (more avocation than occupation) who has owned his store for 27 years, said the millennials and even younger music lovers are discovering the joys of vinyl. The digital world, convenient as an iPod but also cold and sterile, can’t compete.

“You’re in it for the fairy dust of the music,” he said of records.

Mike Batt, owner of three Silver Platters stores  including one in Lynnwood  said the cool factor is part of the reason for the vinyl revival, but there’s also the tendency for culture to repeat every 15-20 years. That happens when children hit their teens and early 20s and begin relating to their parents on a new level.

In his own family’s case, Batt’s 14-year-old son has recently discovered TV shows from 15 or so years ago, like “Friends,” and he likes watching them with his parents. Likewise, his son and his friends are discovering the music that their parents and grandparents treasure.

The fact that older millennials and the Gen X’ers who preceded them are now buying records is a happy surprise for the record store survivors like Arlin and Batt.

Batt said customers in their late 20s to 40s grew up in an age when music could be had for free, or dirt cheap, such as iTune’s 99 cents-per-song deal, so they didn’t seem like future buying customers.

But, he said, they now have more discretionary income, and it’s natural that when people pay, they want something to show for it, something more tangible than a download.

The vinyl revival is being helped, too, by a groundswell surrounding Record Store Day, a nationwide celebration supported by record stores that will mark its 10th anniversary on the third weekend in April.

While younger people are buying new records, boomers are heading for the used racks. Among them in both groups are the collectors, the ones who have a passion, an itch to scratch or, Batt believes, a sickness.

He said he joined a panel in a forum on vinyl collecting, and someone asked, “How do you know when it’s a sickness?”

Batt told them, “It’s a sickness when you find yourself doing retrofits of your home or buying a new home to make more room for that collection.

“Every person on that panel had been in that situation,” he said.

Serious collectors can relate. The largest known vinyl collection belongs to a 65-year-old Brazilian businessman who has bought several huge collections over the years, including a 3-million LP and 45s collection that belonged to a Pittsburgh music store owner.

Zero Freitas stores his massive collection in a 25,000-square-foot warehouse in São Paulo. In a New York Times story in 2014, Freitas said he doesn’t know why he is compelled to keep buying vinyl.

“I’ve gone to therapy for 40 years to try to explain this to myself,” he told the Times.

But boomers who have been hanging onto their records, thinking resellers or collectors will pay them big bucks, are likely to be disappointed. Arlin said customers come into his store with an old album they’re certain is valuable, until he takes them to the racks and shows them he’s already got a dozen other copies.

Batt agreed. “People have it in their heads that they have a fortune, and it’s hard to tell them that it’s not.”

There are websites, like Popsike and Collectors Frenzy, that list what certain albums are selling for currently.

And there are, of course, some LPs worth hanging onto for your retirement fund.

Both Arlin and Batt cited the Beatles’ 1966 release “Yesterday and Today,” popularly known as the “Butcher album” because of the grisly cover art featuring dismembered dolls and cuts of raw meat.

It created such a stir that after the first few copies sold, the remainder were recalled and a new, tame cover was pasted over the original.

Interestingly, it’s the reissue, with the original cover safely hidden behind the pasted overlay, that’s the most valuable. Recent ones in pristine condition have gone for $10,000.

But those gems are few and far between. Your LP collection isn’t a retirement plan.

Instead, Arlin suggested, dig out that old stereo or buy another record player and rediscover the memories. Sprinkle on some fairy dust.