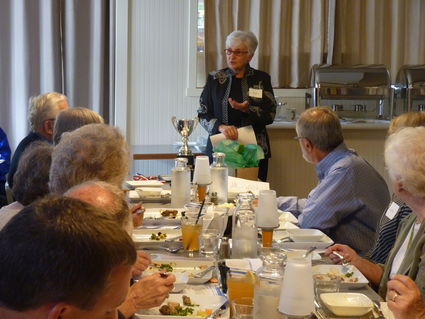 Michelle Martin, founder and president of the Edmonds Petanque Club, accepts the Kiwanis Club Citizen of the Year award on Thursday, May 26, at Salt & Iron in Edmonds.

The Edmonds Kiwanis Club has chosen the Edmonds Petanque Club as the 2016 Citizen of the Year.

“The selection committee had quite the challenge as there were many great and deserving candidates,” Kiwanis President Mary Lou Kantor said. “The Edmonds Petanque Club was selected for its commitment to many charities in the Edmonds community, including the Edmonds Food Bank.”

The club was honored at an Edmonds Chamber of Commerce lunch on Thursday, May 26, at Salt & Iron.

Petanque Club founder and president Michelle Martin started the club in 2010, after returning from a trip to Pe...