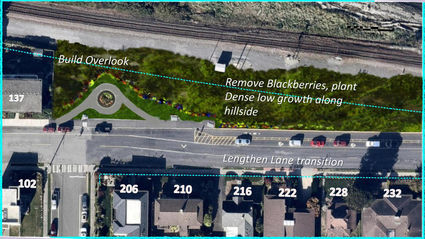 Concept plans for Sunset Avenue include a south-end overlook, removal of blackberries, and plantings with dense, low-growth plants along the hillside.

Residents and visitors to Edmonds have had well over a year to use and weigh in on the city’s proposed changes to Sunset Avenue. Some welcome the changes, while others consider them to be a “miserable failure.”

The Edmonds City Council heard from citizens on Tuesday before a presentation by the Public Works director on the proposed concepts for Sunset Avenue.

Sally Wassell, a 27-year resident of Sunset Avenue along with her husband Jim, told the council that she went through the city’s 167-page survey on the temporary striping of the road to evaluate public opinion. Her conclusion: It’s a failure.

Wassel and her husband, along with other Sunset Avenue residents, cited idling motors, dangerous angled parking, drivers heading the wrong way on Caspers Street, and abuse of allowed parking times as reasons the project is not working.

Others said the city seems to listen to public comment as a formality, and their concerns are not addressed.

“I feel those of us who have spoken against this project, our opinions, have gone on deaf ears,” said a woman who is a 30-year resident of Sunset. She is against the project but willing to make compromises.

“I believe this is just a formality to let us get up here and say our piece, but nothing we say would and has not been considered.”

Royce Napolitano lives with his wife and daughter on Third Avenue. He said he has seen an increase in both pedestrian and vehicle traffic, but he would like to “share the resources of our beautiful community with its citizens and guests.”

“We love Sunset,” Napolitano said. “We may not like every bit of the current configuration  the parking and the increasing traffic  but please do not let the vocal minority steer this decision.

“The community wants this project to move forward.”

Napolitano also said walking communities are healthier communities, and he urged the council to support programs, policies and projects, like the Sunset Avenue Walkway, that encourage walkability.

Public Works Director Phil Williams said the project has been five years in the making, and major improvements include additional parking, picnic tables and a south-end overlook.

Parking is one of the major issues Williams addressed.

The intersection of Sunset Avenue and Edmonds Street will be raised slightly to create an “elongated speed bump,” which will provide crosswalks and act as a traffic calming device.

There are 11 parallel parking spaces now. Williams would add eight more, for a total of 19 stalls. Picnic tables also would be added to grassy areas between the angled parking. 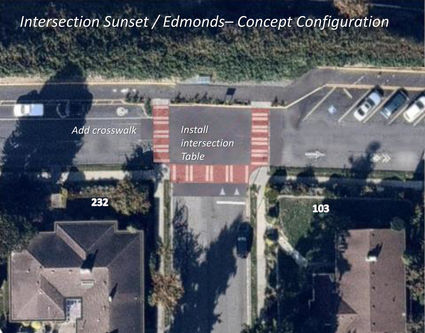 The intersection of Sunset Avenue and Edmonds Street will be raised slightly to create an elongated speed bump, which will provide crosswalks and act as a traffic calming device.

Councilmembers addressed the four-hour parking restriction and suggested that it be lowered to three hours.

Other issues that councilmembers said need further development and discussion include portions of the project located on Burlington Northern Santa Fe’s property, use of bicycles on the path, controlling wrong-way driving on Caspers Street and parking enforcement.

To view the proposed changes, visit http://www.edmondswa.gov and search for the May 24 council agenda.