Crossing Hwy. 99 is a risky bet 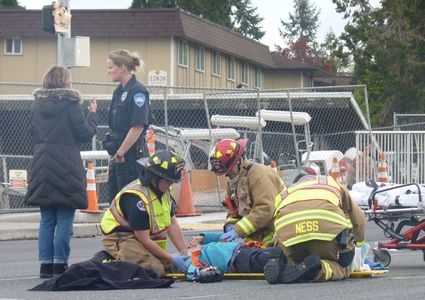 An 88-year-old woman was struck by a vehicle around 5:40 p.m. Monday, April 4, while trying to cross Highway 99 near 228th Street S.W. and Country Farms market. Crosswalk signals (background) have been installed as part of the City of Edmonds road construction project to complete a missing link of roadway on 228th Street from Highway 99 to 76th Avenue. The signals will be activated around April 19.

A woman was struck by a vehicle while trying to walk across Highway 99 near Country Farms market on Monday, just weeks before new crosswalk signals will be activated.

The 88-year-old victim was transported to Harborview Medical Center with head and ankle injuries on April 4 as the result of a hit-and-run near 228th Street S.W. As of Tuesday, she was in stable condition.

Edmonds Police continue to look for the driver of the vehicle. The suspect is a woman who was driving a light-colored Honda sedan with a partial license plate of “AOE123.”

“We still have limited information at this time,” Sgt. Shane Hawley said on Wednesday. “We are hoping anyone that may have seen the collision, or knows anything about it, can call us or send us an email.”

The city is in the final stages of a $6.4 million road construction project at Highway 99 and 228th Street S.W. that will add traffic and crosswalk signals at the newly-constructed intersection.

The signals are in place, but are inactive and covered by cardboard. They are scheduled for activation around April 19.

Residents of the area voiced concerns about pedestrian safety at a March 24 community planning workshop about the revitalization of Highway 99.

Megan Woodard, who lives near 76th Avenue and 236th Street S.W., said safety and lighting improvements and more crosswalks and signals are needed.

“I’ve never tried to cross as a pedestrian,” Woodard said, “absolutely not.”

Although Woodard said jaywalking across Highway 99 isn’t worth the risk, many take the chance due to a 1-mile strip of highway that is without a single, signaled crosswalk.

Woodard said the lack of pedestrian access to the east and west sides of Highway 99 has forced her to buy a car.

“The area has services,” she said. “Aurora Market is only about a 10-minute walk away, but I don’t feel safe walking the most direct route, and I end up going out of my way to get there.

She moved to Edmonds from the Wallingford neighborhood of Seattle about four months ago.

“I used to live in Wallingford in a walkable neighborhood,” Woodard said, “but I had to get a car to get the business of life done here.”

Updates on the project at 228th Street and 76th Avenue can be found on the city's website.

Completing the missing link at 228th and 76th

The City of Edmonds project will complete the missing link of roadway on 228th Street from Highway 99 to 76th Avenue, creating a direct connection between Highway 99 and various regional transportation facilities for southwest Snohomish County.

The center median will extend on Highway 99 to restrict the southbound left turn from 76th Avenue to Highway 99.

A safer left turn will be provided at the new signalized intersection at Highway 99 and 228th Street, with protected left turn phasing for northbound and southbound movements.

A traffic signal will be added at 228th Street and 76th Avenue.

Bike lanes, sidewalks and lighting will be added on both sides of 228th Street.

The project includes a partnership between the cities of Edmonds and Mountlake Terrace to complete a pavement overlay that will include reconstructing part of Lakeview Drive in Mountlake Terrace.

Stormwater detention vaults, infiltration galleries and bio-swale will be added within the project limits to improve drainage, as well as water and sewer upgrades.