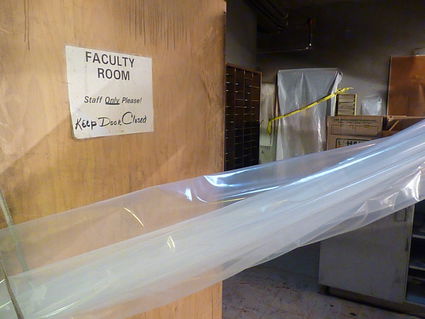 The faculty room, administrative offices and health room were sectioned off with plastic tarps from classrooms in the other half of the building due to water and smoke damage.

A fire that started in a supply closet on Sunday night at Madrona K-8 School caused an estimated $250,000 in fire, smoke and water damage. Classes have been canceled through Thursday, March 31, as the Edmonds School District awaits the results of air quality tests.

According to Snohomish County Fire District 1, the cost estimate is likely to increase significantly.

“We do expect that dollar loss to go up significantly, and the investigators are working on getting a better number today,” Fire District 1 spokesperson Leslie Hynes said on Tuesday, March 29.

The initial estimate was made in the dark the night of the fire, Hynes said, and investigators are taking a closer look at the damage.

“It is very important to our superintendent that for students and staff the air quality of that unit is verified as safe,” Jakala said.

A local company is testing the air for over 60 chemicals to verify safety. Jakala said the normal turnaround time for results is five days, but the company is expediting its service.

“A two-day turnaround is absolutely the tightest, quickest turnaround they can give us,” she said.

If the district receives a clean bill of health on Thursday, Jakala said, the school will reopen on Friday. The students will be out for spring break from April 4-8.

While the fire occurred in a storage room off of the faculty lounge, the water and smoke damage impacted the entire unit.

“Even standing 20 feet outside of it [the faculty room], you’re still dealing with the wafting of the smoke,” Jakala said after a visit to the school Tuesday.

The unit includes three classrooms, the principal and assistant principal’s offices, the office manager, the dean of students’ office and the counseling office, and “here’s the big one when you’re dealing with a school of 650 kids  the health room,” Jakala said.

The offices and health room, and potentially the classrooms, will need to be relocated while the unit undergoes reconstruction. The district is working on a relocation plan.

About 54 students in grades four, five and six will be displaced, as well as about 50 to 60 students who visit the Learning Support Center throughout the day.

Medications, like epipens, for students with life-threatening illnesses, were lost in the fire. Jakala said about 100 students will be affected. The district will work with the insurance company and parents to replace the medications. It also is planning for a secure location to store students’ medications during reconstruction.

The intercom system also was “fried,” Jakala said, and the phones, building-wide, were not working. They are currently being restored.

Items ranging from large rolls of paper to cupboards full of supplies and furniture were lost.

Fire District 1 firefighters were dispatched to Madrona K-8 at 9300 236th St. S.W. around 8 p.m. Sunday after an automatic fire alarm was set off.

There was no one in the building at the time of the fire, and there were no injuries. 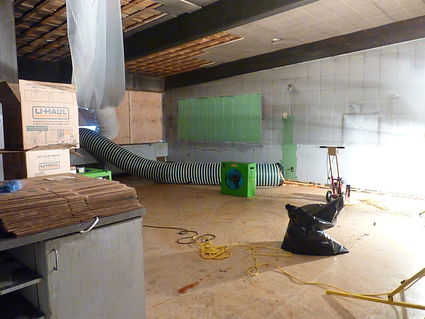 The faculty room was blocked off Monday as cleanup crews worked to strip the room of damaged items and salvage what remained.

“The first arriving firefighters saw black smoke billowing from the building in the area we now know is the faculty lounge,” Hynes said, “so they called for a full commercial fire response, which sends more engines. Then, they called for a second alarm.”

Over 40 firefighters from Fire District 1, Lynnwood and Shoreline responded. Hynes said not all were needed to extinguish the fire, but since it’s a school and a large building, they were called for backup.

Firefighters contained the fire to the faculty room and extinguished it within 15 minutes. The adjacent school office and the outside hallway have smoke and water damage. Hynes said closed doors kept smoke from entering nearby classrooms.

She said the investigation is ongoing, and the cause is undetermined.