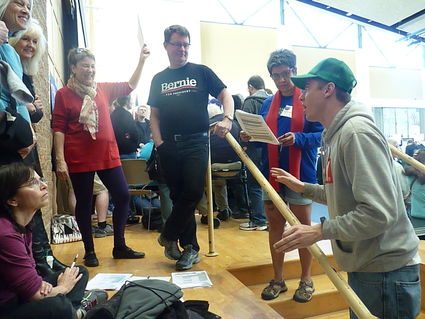 Daniel Cook (far right) argues for his candidate, Sen. Bernie Sanders, with a group of Edmonds Precinct No. 9 voters, including (from left) Maggie Fimia, David Edelman and Priya Sinha, on Saturday, March 26, at the Democratic Party caucus at Meadowdale High School. Cook, 21, said it was important for him to turn out on Saturday. The only way to get Bernie elected is to physically be here, he said.

Cars overflowed from the Meadowdale High School parking lot and filled neighborhood streets. Lines wrapped around the outside of campus buildings at about 10 a.m. as thousands eagerly awaited entrance to the caucus site.

Over 4,200 registered voters who identify as Democrats in the 21st Legislative District turned out to caucus.

Participants filled in forms with their pick for nominee, and then divided into groups by precinct. An initial count of the votes was made.

A group of voters from Edmonds Precinct No. 9 gathered on the school’s assembly hall stage to discuss their pick for the Democratic nominee.

Each group member was given the opportunity to vie for his or her candidate, and a recount was done in case people were persuaded to change their vote.

Daniel Cook, 20, of Edmonds argued for his candidate, Vermont Sen. Bernie Sanders, and said it was important for him to turn out on Saturday.

“The only way to get Bernie elected is to physically be here,” he said.

Others were there to caucus for Sanders, as well; however, the majority of the group favored Clinton.

Although there was strong support for each candidate, Sanders walked away with 417 delegates from voters in the 21st Legislative District to Clinton’s 165 for the district’s April 17 caucus.

At Edmonds-Woodway High School, voters from the 32nd Legislative District will send 728 delegates  514 for Sanders and 211 for Clinton  to the 32nd District’s caucus at 1 p.m. Sunday, April 17, at Shoreline Community College.

While Saturday’s voter turnout was high, it did not break records. At EWHS, 6,786 democratic voters participated in this year’s caucus, compared to 8,447 in 2008.

The Washington State Republican Party caucus was held on Feb. 20, but focused only on county and state legislative candidates.

Washington state Republicans will award their delegates based on results of the May 24 presidential primary. Ballots will be mailed out on May 6 to registered Washington voters, and must be submitted and postmarked on or before May 24.