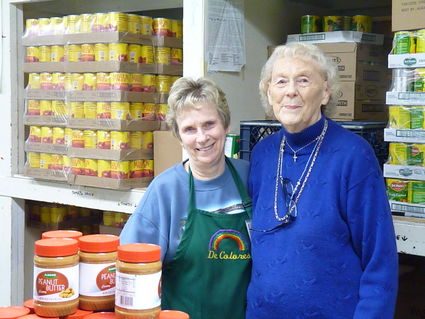 (from left to right) Gretchen Dixon and Peggy Kennedy began volunteering at the Carol Rowe Memorial Food Bank in 1981 at the Edmonds United Methodist Church. Kennedy, who has been the director of the food bank for the past 35 years, is retiring. A celebration was held in her honor on March 4.

An Edmonds woman who has helped feed thousands of families through 35 years of service at a local food bank is set to retire.

Peggy Kennedy, 87, remembers when the Carol Rowe Memorial Food Bank opened in 1981 at the Edmonds United Methodist Church. It was housed in a space that Kennedy said was not much larger than a closet.

“We really thought, and so did most of Edmonds, that it’d be six months and then there wouldn’t be a need for a food bank,” Kennedy said.

The Washington State Department of Social and Health Services approached a pastor at the church about the need for a food bank in Edmonds. The closest one at the time was in Mountlake Terrace, and it was difficult for some members of the community to make it there.

The pastor called for volunteers, and Kennedy and fellow volunteer Gretchen Dixon stepped up.

“Gretchen and I, when we first started, we couldn’t stand the thought of a child going hungry in the United States,” Kennedy said. “It seems so wrong, and that’s one of the reasons it was so easy to talk us into it.”

The food bank served about 30 families per week and provided canned and dry goods.

Kennedy said when the food bank first opened, they weren’t able to provide bread, and they didn’t have any means of refrigeration or freezers.

Now, the food bank serves about 18,000 households per year.

“Over the years, it just grew,” Kennedy said.

With ample space  a walk-in freezer and refrigerator, a large community room for distribution and a loading dock for goods  and over 130 weekly volunteers, the food bank was able to serve 59,657 individuals and provide 594,468 meals in 2015.

Kennedy said the food bank grew “with little tiny steps and a lot of prayer.”

For many years, she served as a volunteer, and for the last 15 years, Kennedy has been paid part-time for about 17 hours per month.

She thinks of the volunteers as family, and they think the same of her.

“Peggy is amazing, very kind and giving,” said Lourdes Becker, who registers new guests and provides Spanish interpretation. “She’s so sweet to everyone that needs food. She’ll say, ‘I will get it for him or her,’ even when she can barely walk.”

Kennedy will continue to help out at the food bank, but retired from her official role as director on March 4.

Volunteers and community members gathered that day in Kennedy Hall, which was named for her in October, to celebrate Kennedy’s retirement with a meal  a catered lunch from her favorite restaurant, Todo Mexico.

Kennedy said she will treasure memories of the many wonderful people who “have come through the line,” and working with the other volunteers.

“It’s been such a blessing in my life,” Kennedy said. “I’m so grateful everyday for this, because I’ve met the most wonderful, giving, caring people.”

As a ministry of the church, Kennedy said the food bank will serve anyone who is in need. Edmonds residents are served first, and then others.

“It’s humiliating having to come through that line for the first time,” Kennedy said, but the volunteers are there to warmly greet people and make it the best experience possible.

Volunteer drivers are needed for picking up donations from Northwest Harvest, Volunteers of America and local grocery stores.