‘Shrek the Musical!’ is ambitious, fantastic undertaking for MCT 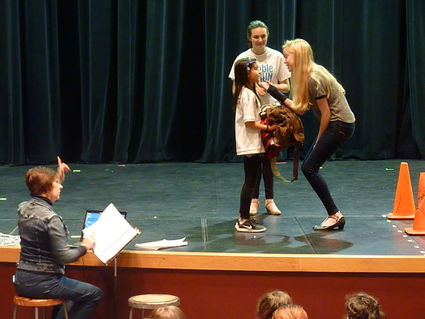 (from left to right) Assistant music director Nancy Press leads Sophia as a young Fiona, Dorothea as Fiona and Stephany as Queen Lillian through a rehearsal on Tuesday, March 8, for Madrona Childrens Theatres production of Shrek the Musical!

With a microphone in hand and a script nearby, director Marianni Groves shouts, “Where’s Jasmine, Belle and Cinderella?” from a seat in the middle of the Mountlake Terrace High School Theatre to about 40 actors on stage.

This is Groves’ first year to direct a production for the Madrona Children’s Theatre, which features students from fourth to eighth grade, and she’s pulling out all the stops with an ambitious production of “Shrek the Musical!”

The Swamp Cast  there are two full casts  rehearsed at the MLT Theatre for the first time on Tuesday night. The Kingdom cast h...