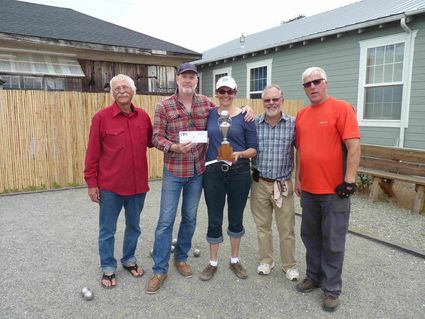 It was almost like traveling overseas. six members of the Edmonds Petanque Club took the ferry to go play in a very unusual venue the beach at low tide in Port Townsend, Washington, on Sunday, June 23.

Games of three matches per team were played on Decatur Street Beach, followed by elimination games held at the petanque court of the Pourhouse Pub, just above the beach.

Fees and donations raised at the tournament helped buy four tons of food for the Jefferson County food bank.

When boules were hurled toward the small target ball the French call a cochonnet, squirts of salt water from disturbed clams went up into the air.

The last game played on the beach even had to be shortened because the rapidly returning tide.

All in attendance had a great time of playing and enjoying fine fellowship. A team from the Seattle Petanque Club (Greg Conyers and Linda Ferguson) finished first and won the tournament.

The second place went to a team from the Edmonds Petanque Club (Jerry Fireman and Larry Thomas,) while third place was a tie between Edmonds (Sam Shanshory and Mike Martin) and Seattle (Bob Colley and John Chanthavisay.)

People interested in registering for the Bastille Day Petanque Tournament in Edmonds or simply looking for information on petanque are encouraged to log on http://www.edmondspetanqueclub.org.

In the meantime, Edmonds petanquists keep on gathering regularly on Saturdays and Sundays to play on the three dedicated petanque courts at Civic Center Playfield, as well as on the open soccer field.