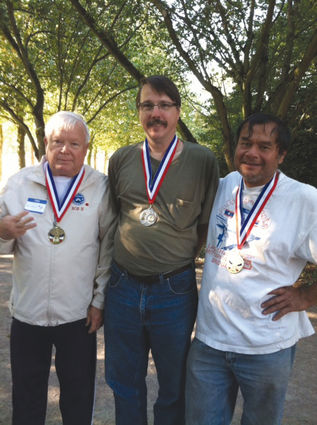 Seven members of the Edmonds Petanque Club drove to Bellevue on Sunday, October 7, to participate in the end of the year tournament sponsored by the Seattle Petanque Club. The competition was held on a beautiful fall day at the Bellevue City Park.

Petanque, a French game similar to bocce or lawn bowling has become very popular in Edmonds since the Edmonds Petanque Club formed two years ago. The game is easy to learn and immediately enjoyable. However, advancing to the tournament level of skill takes a lot of practice.

Players from Edmonds can be seen the year around throwing boules on the three crushed-rock courts at the Civic Playfield on Sixth Avenue South. The recent pleasant weather has drawn a loyal and enthusiastic group on Wednesdays at 1:30 p.m., Saturdays at 10 a.m. and 3:00 p.m., and on Sundays at 1:30 p.m. The Edmonds Petanque Club provides boules for beginners of every age, and offers them friendly instruction.