Implications of a 1% Property Tax limitation on City finances 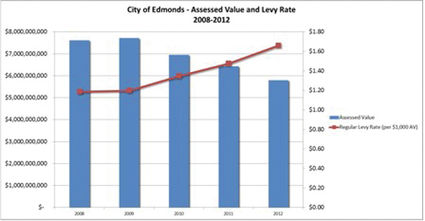 In November 2001 voters passed Initiative 747. The initiative decreased the allowable change in property taxes levied from six percent to one percent.

Initiative 747 was later found to be unconstitutional by the state Supreme Court but the legislature quickly passed legislation that enacted the same limitations that were found in Initiative 747.

The Relationship between Assessed Values and Levy Rates

The 1percent limitation on property tax increases does not apply to specific individual properties within the City. Rather, it applies to the total property tax revenue collected by the City, excluding the value of new construction.

For instance, the City of Edmonds levied approximately $9.5 million in regular property taxes in 2011. A 1percent increase for 2012, then, would collect approximately $95,000.

With a budget of $33 million in the General Fund for 2012, the 1percent increase in property taxes equates to an increase in the budget of 0.3 percent.

The amount paid by property owners is a function of the value of the property and the combined levy rates of all tax assessments. For instance, the predominate levy rate in Edmonds for 2012 is $10.9980 per $1,000 of assessed value.

Homeowners could see their taxes go up or down from year to year, depending upon changes in the home’s value and levy rates. For instance, with a home valued at $400,000 in 2011 that declines to $375,000 in 2012, taxes paid would have gone up by $144 because the average levy rate increased from $9.9503 to $10.9980. The graphic shows the relationship between declining home values and increases in the City’s levy rate, which combine to achieve the 1 percent increase in property taxes.

It is expected that inflation will continue to be greater than the rate of increase in property taxes in the future.

When the City’s single largest revenue source increases at a rate less than inflation, that means that the City effectively has fewer resources to pay for existing services provided to the residents of Edmonds.

There exists within the City of Edmonds, and in many other cities within the state, a structural imbalance between revenues and expenditures.

Current projections anticipate revenue growing by approximately 1.4 percent per year and expenditures by 3.2 percent per year. The growth in revenue is driven primarily by changes in property tax and sales tax.

As mentioned earlier, increases in property tax revenue are limited to 1 percent plus the value of new construction.

Sales tax declined by 14.8 percent between 2007 and what is budgeted for 2012. These two revenue sources account for 55 percent of the revenue in the General Fund.

Increases in expenditures are primarily driven by the cost of labor and employee benefits. For 2012 salaries and benefits account for 52.3 percent of the General Fund budget. The actual cost of compensation is higher, however, since most of the $6.3 million contract with Fire District #1 is for employee costs as well.

Most of the City’s employees are part of a union and salaries are negotiated with the union every few years. Medical benefits are expected to increase by approximately 11 percent per year in the future.

This structural imbalance means that expenses will continue to grow faster than revenue.

This deficit will grow each year reaching approximately $2.8 million in 2016.

The City will spend a good part of 2012 looking for ways to address the growing deficit.

This will include a review of available options for expenditure reductions and potential revenue increases.

Residents will have the opportunity to provide feedback on proposed changes to the budget as the City Council holds public hearings later this year as part of the budgeting process.