City of Edmonds revenue sources and restrictions on their use 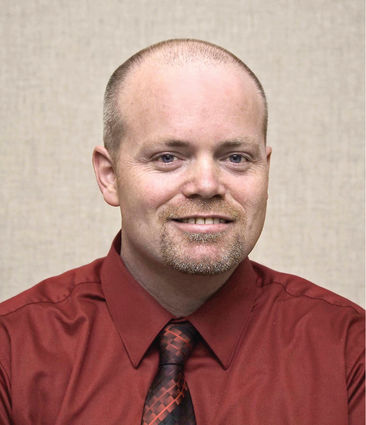 While $66.7 million of revenue appears to be a large amount of available resources for the City, a significant portion of that revenue comes with restrictions on how the money can be spent, as illustrated below.

Many of these restrictions are either legal or contractual, meaning the City Council has no discretion over how the money is to be used.

Below is a table that shows all the budgeted funds for 2012 and the amounts that are restricted.

The General Fund is the general operating fund of the City and encompasses the major services provided by the City (excluding utilities): police, fire, parks and recreation, street and right of way maintenance, development services, legal, judicial, and financial services, and general administration.

Of this amount, the largest restriction is the Emergency Medical Services levy, a revenue source that brings in approximately $3.2 million per year and, along with approximately $750,000 of emergency transport fees, can only be used for the provision of emergency medical services according to state statutes.

What does this mean for the City? Approximately 76 percent of the revenue in the General Fund remains unrestricted.

This being said, two of the largest revenue sources, property tax and sales tax, comprising 55 percent of the revenue in the General Fund are flat or have been declining the last few years.

Increases in property taxes, the City’s largest revenue source, are also limited by state statute to no more than 1 percent each year. Compared to the amount collected in 2007, estimated sales tax revenue for year 2012 has declined 14.8 percent.

With 24 percent of the revenue in the City’s General Fund being restricted to particular purposes, and two of the largest revenue sources flat or declining, less discretionary resources are available to the City to address existing and emerging needs of its residents. Over the last several years, other fund balances have also declined which places even greater pressure on limited discretionary revenue within the City’s General Fund.

Restrictions in Other Funds

Most revenue in other funds also has restrictions on the use of those resources which is why the revenue is recorded in separate funds.

For instance, the City receives approximately $840,000 in motor vehicle taxes and $600,000 of vehicle license tab fees, both of which must be used exclusively for transportation related improvements.

The City expects to match that revenue with nearly $1.5 million of grant revenue in 2012 for street maintenance and improvements. 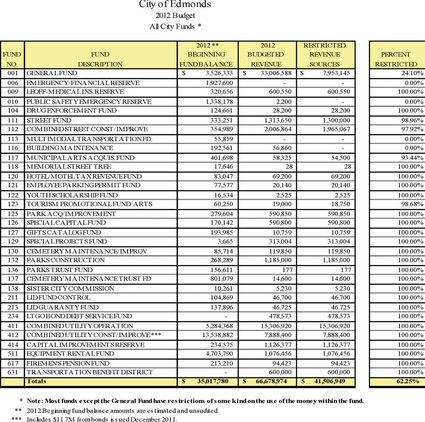 Examples of other significant restricted revenue include: over $24 million in utility revenue that must be used for operations, maintenance and capital investment for the benefit of utility customers; approximately $1.2 million annually from two different types of real estate excise taxes that are limited by state statute to capital infrastructure construction and maintenance, and Parks and Recreation related projects by Council policy; a transfer of approximately $600,000 from the General Fund into the LEOFF retirement fund as required payment of medical benefits for retired firefighters, police officers or their surviving spouses; and an estimated $70,000 in lodging taxes that state statute requires be used exclusively for tourism promotion.

As mentioned previously, fund balances in the other funds, besides the General Fund, have declined significantly the last several years.

Because the use of revenue in these other funds is very limited, that means there has been and will continue to be pressure on the General Fund to keep other funds financially viable.